Thinking of applying to the University of Cambridge as an international student? Then read our guide to get the inside information on what the uni and city are really like.

What are the best things about studying in Cambridge?

It’s no secret that Cambridge is absolutely gorgeous. This medieval city is crammed with as much stunning architecture as there are cobblestone paths – just check out King’s College in our city guide to Cambridge. Many colleges in Cambridge date from the early Medieval period, so there’s a chance that your student accommodation might just feel like you’re living in Hogwarts.

Cambridge is in a great location, just north of London, with excellent transport links to other cities. The train from Cambridge to London takes just under an hour and there is a coach service to Oxford. Due to its location in the South East of England, Cambridge tends to be warmer and drier than other parts of the UK.

If you are a keen rower, then Cambridge might just be the place for you. The River Cam flows through Cambridge, meaning that rowing is taken very seriously in this city, with a highly competitive Boat Race taking place annually between the University of Cambridge and the University of Oxford. And if you fancy something a bit more relaxing, there’s always punting –  a small flat boat which you push along the riverbed with a pole.

Cambridge is one of the most expensive cities in the UK. It’s not quite as expensive as London, but accommodation prices are a lot higher here than they are in the North of England or parts of Scotland. And the city can get pretty packed too as lots of tourists flock to Cambridge throughout the year.

And if you are looking to party hard, then this might not be the city for you. Although there are several clubs, the nightlife does not compare to bigger cities such as Manchester or London. Instead, the social calendar at the University of Cambridge revolves around traditional balls – formal dances where the attendants are expected to wear black-tie.

Yes – to a certain extent. In a 2001 census, 89% of Cambridge residents identified themselves as white, in comparison to the 92% average elsewhere in the UK. This is partially due to the sizable international student population in Cambridge, with 41% of students coming from overseas. There are several places to worship in the city centre, including a mosque, synagogue and a Buddhist temple. And there is a selection of international supermarkets too – mostly concentrated on Mill Road.

Cambridge is legendary for its university – first established in 1209, it’s the second oldest uni in England and the fourth oldest in the world. With over 31 Colleges, Cambridge is a quintessential university town with a great community of students and academics. It’s also a major centre for scientific research – Cambridge is home to the UK’s first successful organ transplants. And Isaac Newton, Charles Darwin and Stephen Hawking all count as alumni too.

And of course, Cambridge is famous for punting. You can opt to row privately in a punt boat, or even have a chauffer guide you around the river banks. 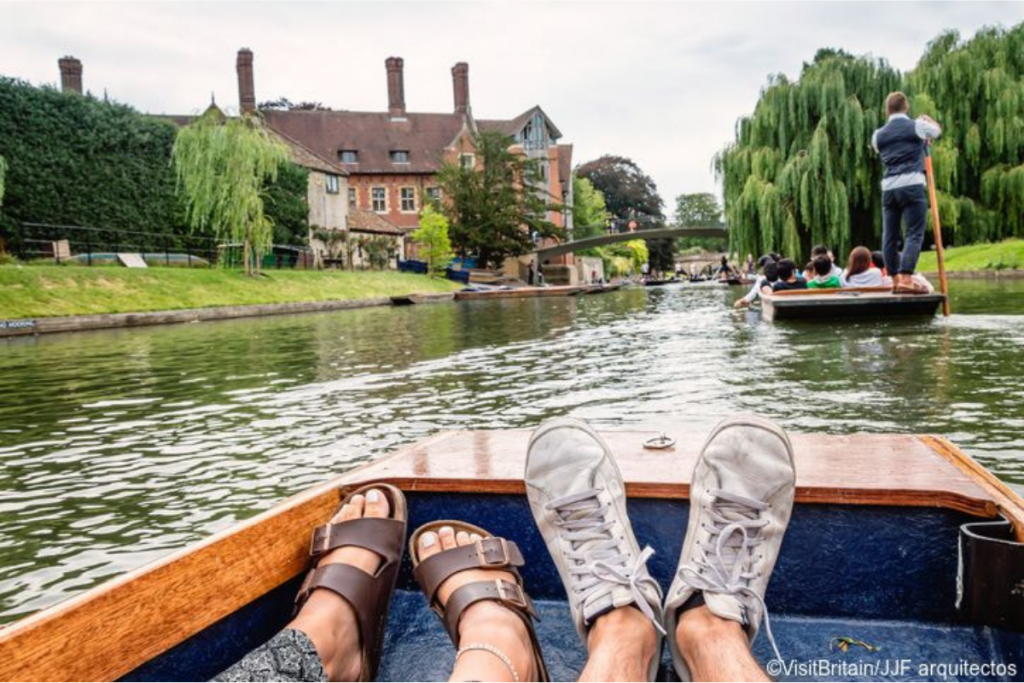 Where does the University of Cambridge rank?

It’s at number six in the global university rankings for 2021 and is second in the UK – so Cambridge is clearly one of the best universities in the world. It ranks very highly across all subjects but is especially awesome for biological sciences, anthropology, and engineering and technology.

How much does it cost to study at the University of Cambridge?

You can expect undergraduate fees to start from £22,227 per year for arts and humanities degrees and £33,825 for science degrees – excluding medical science and veterinary science which cost £58,038 per year.

In terms of typical living expenses for students, the University of Cambridge estimates that the cost of living in Cambridge is £11,230 per year (excluding tuition and college fees). So you will need to make sure that you factor this figure into your budget too. 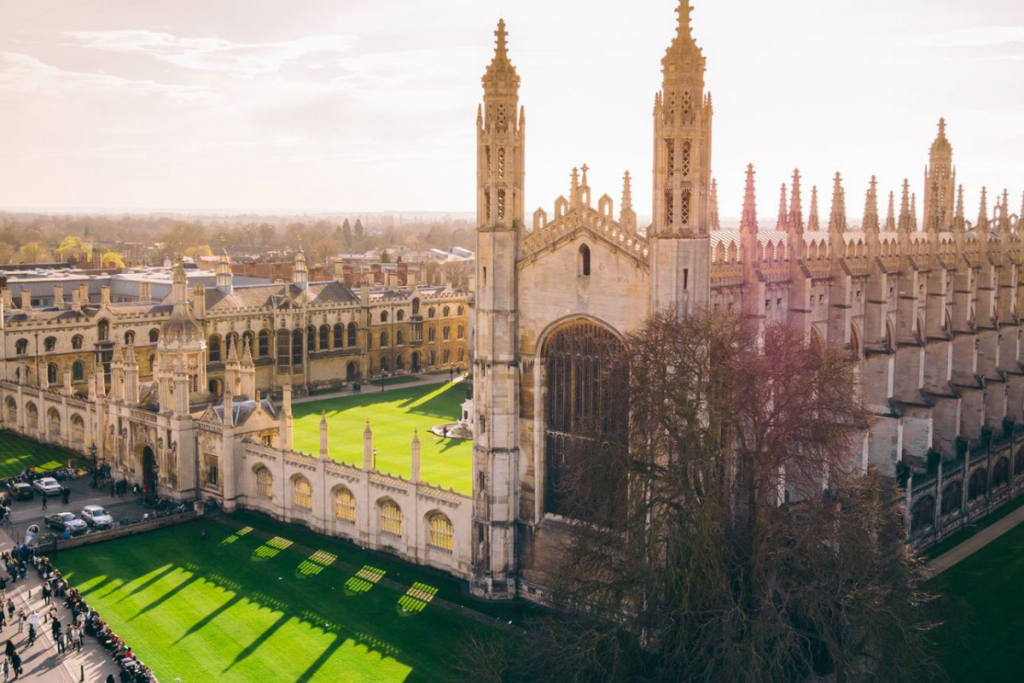 The University of Cambridge does not have a main campus. Instead, its faculty buildings and colleges are scattered across the city, with most teaching time focused on small seminar groups in the Colleges. But not to worry if you do need to flit from one faculty building to another – as Cambridge is a small city, everything is pretty much within walking distance or by bicycle, which is the preferred mode of transport for students.

In your first year at Cambridge, you will live in College accommodation, rather than in student halls of residence. You are then guaranteed accommodation in College-owned property for the rest of your course, which will be within a three mile radius of your College. However, it is worth mentioning that accommodation costs can vary from college to college. And of course, the bigger the room, the pricier the cost.

One of the perks of student accommodation at Cambridge is that each College has its own porters – a dedicated team of staff who are the first point of contact if you have any problems. And at Cambridge, you don’t choose between catered or non-catered accommodation. Each college has self-catering facilities as well as a canteen which serves a fancy three-course dinner for a subsidised price.

Does Cambridge have a good nightlife?

The nightlife at Cambridge is not comparable to major cities such as London. What Cambridge does have to offer is a string of small clubs, which might be just the thing if you are from a small town and are a bit nervous about going clubbing for the first time. Try student nights at Vinyl or Lola Lo – a tropical-themed club with Tiki booths. Or if you are a veteran clubber, try MASH, which has more alternative music than the standard Cambridge cheese.

Will I be able to find a part-time job in Cambridge?

Yes – this city attracts more tourists than you’ve had hot dinners, so there’s always part-time jobs to be had in the city centre.

If you fancy a job in retail, it’s worth handing out your CV in shopping arcades such as the Lion Yard shopping centre or the Grand Arcade. And if you want to stay closer to home, then there are plenty of job opportunities at the university – Colleges regularly recruit part-time staff to work in their canteens.

Due to its small size, Cambridge is a walkable city. And if you are a keen cyclist then you’ll love Cambridge. In spite of the cobbled pathways, Cambridge is incredibly bike-friendly, with stacks of bicycle ranks outside the station and dedicated places to park your bicycle.

There are also a lot of public transport options too – you can get a bus from the station into the city centre, while Cambridge railway station has direct links to London, Norwich, Leicester and Birmingham. 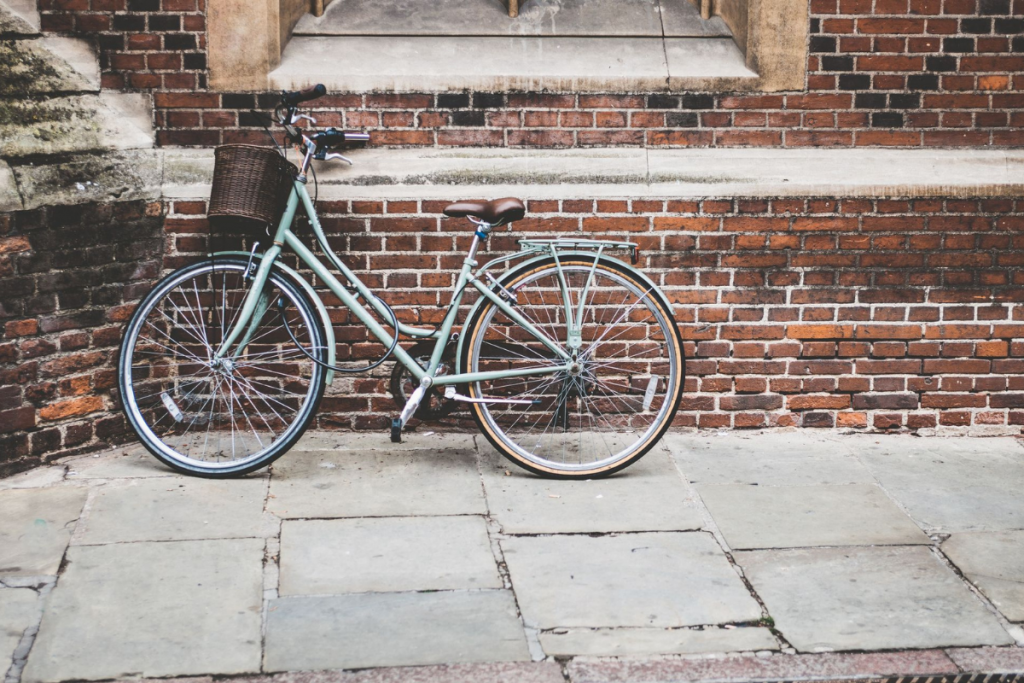 How to apply to Cambridge University