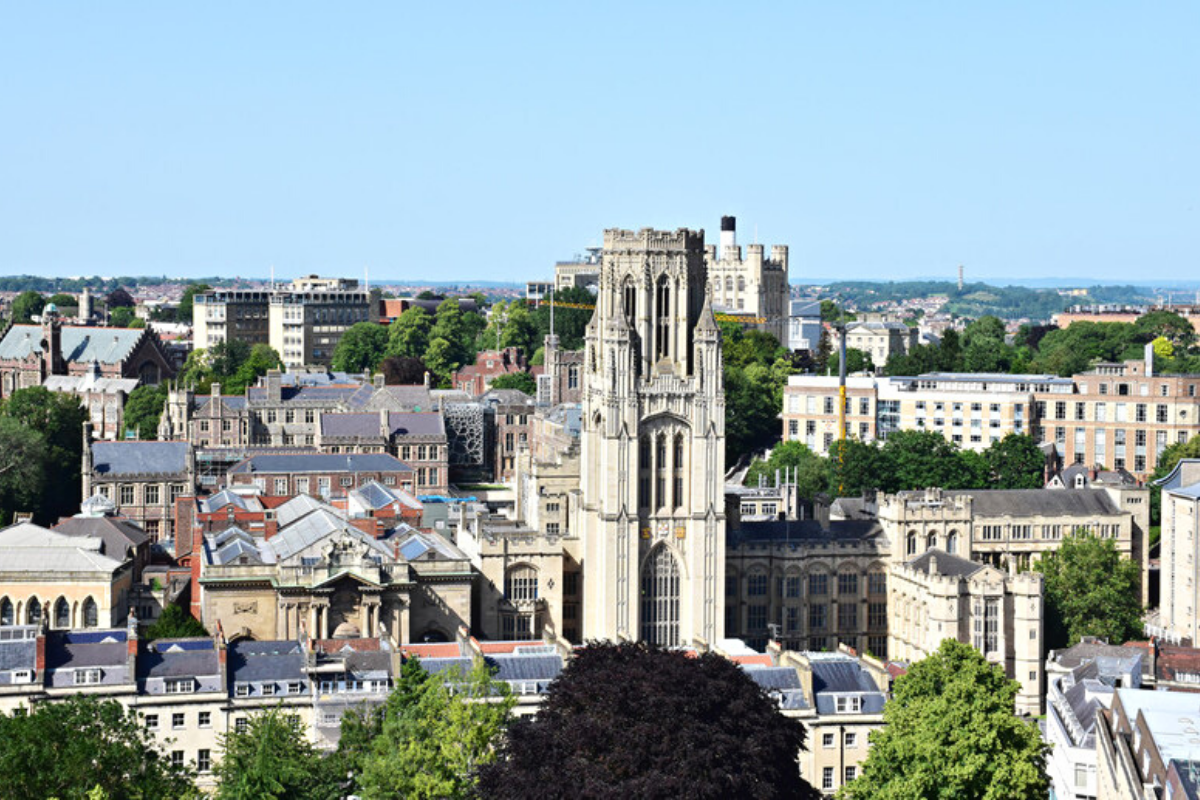 Thinking of applying to the University of Bristol as an international student? Then read our guide to get the lowdown on what the uni and city are really like.

What are the best things about studying in Bristol?

The edgy, artsy city of Bristol in England is perfect for those looking for a London vibe with a lower price tag. Its urban, seaside location appeals to city dwellers and nature lovers alike.

Once a lively port city, Bristol has retained its reputation for having one of the liveliest social scenes in the country. And has plenty to offer when it comes to bars, restaurants and nightclubs – two of the most popular being Lakota and Thekla. The abundance of things to do in the evening is thanks to its youthful population, which is much younger than other UK cities, with the average age in the city being 32 years old!

If art is more your thing, then Bristol is perfect for you. Not only is it home of the world-famous street artist, Banksy, but the city also hosts Europe’s largest street art and graffiti festival, UpFest, in the Spring.

In 2021 the Sunday Times Good University Guide ranked the University of Bristol 113th out of 116 universities when it came to having a diverse student body. The university ranked poorly on the number of students who were the first in their family to go to university or educated at state schools. And the university has a less diverse mix of students, with fewer students from a Black, Asian, or Minority Ethnic background than the national average.

Bristol also has an uncomfortable history due to its involvement with the transatlantic slave trade. The harbour has been an international port since mediaeval times, and in the seventeenth century it began trading enslaved Africans to the Caribbean and Americas. By the 1730s, Bristol became Britain’s number one slave port. And the M Shed museum, located on the harbour’s dockside, explores Bristol’s dark history and is worth a visit.

Lastly, Bristol can be a walkable city, but only if you are willing to hike up frequent steep hills. Those who bike or walk as their main form of transport may find it more difficult than in other cities.

If you’re looking for an evolving city that is multicultural then you’ll be interested to know that 22% of the population is non-white and in the past twenty years, the Black and ethnic minority population has almost tripled. And 30% of students at the University of Bristol are international. Not including international students, 19.5% of undergraduates are from Black, Asian or Minority Ethnic backgrounds. This is up from 14.5% in 2016 but is still below the 27.4% UK higher education average for home students.

You will find international supermarkets in Bristol including Alfu International Supermarket and International Food Centre which are a 15 minute bus ride from campus. Shops selling Chinese, Vietnamese, Afro-Caribbean and Middle Eastern food can also be found in the city. And you can source Halal meat.

What is Bristol famous for?

In 1497 the first European ship to reach mainland North America departed from Bristol Harbour and a number of historical ships from that era are still moored here for people to visit, including Brunel’s SS Great Britain which was the longest passenger ship in the world and the first iron steamship to cross the Atlantic.

And one of the city’s most iconic landmarks has to be the Clifton Suspension Bridge which spans across the River Avon and has appeared in a number of films (including The Truth About Love and The Inbetweeners 2) which you can fully appreciate from Cabot Tower, in Brandon Hill park. The tower was named after the explorer John Cabot, who was an Italian by birth but settled in Bristol and went onto discover North America even though he was looking for Asia!

In more recent times the city has become world famous for the Bristol International Balloon Fiesta when you will see over 130 hot air balloons from across the world take to the sky from dawn to dusk. 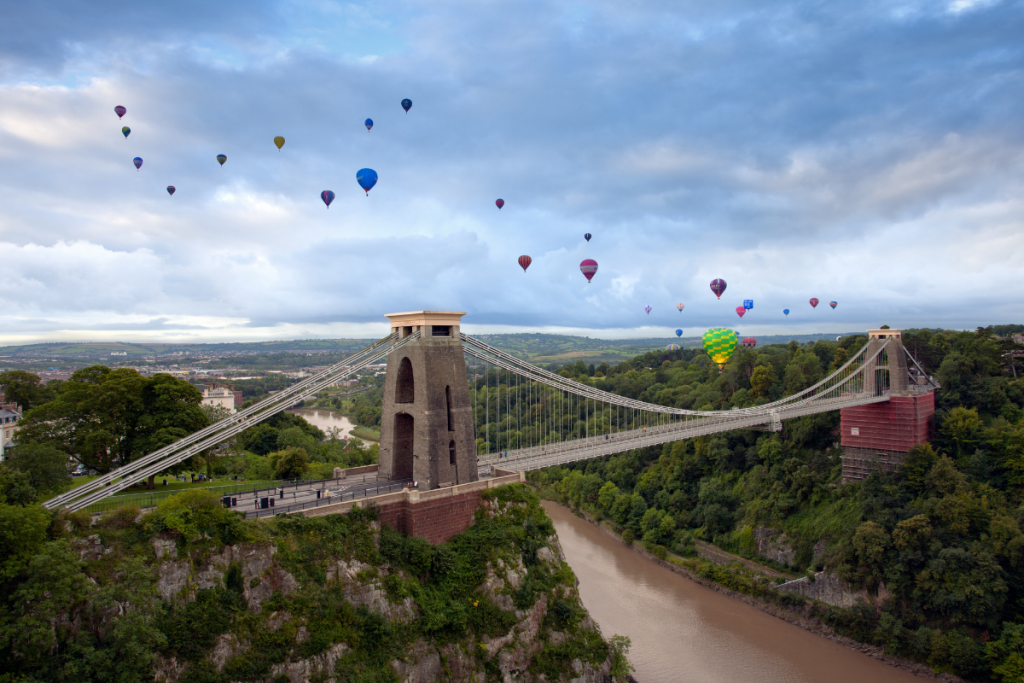 Where does the University of Bristol rank?

In 2021, Top Universities ranked the University of Bristol as the 9th best uni in the UK. Globally, it is ranked 92nd according to Times Higher Education.

How much does it cost to study at the University of Bristol?

Yes– and the university has simplified the process for international students applying for scholarships. You only need to apply for the Think Big International Scholarship, which offers £5,000 or £10,000 per year, and then you are automatically considered for any other international scholarships you are eligible for.

Most classes and libraries are on the Clifton campus, which is large but walkable. The Langford campus is home to Bristol Veterinary School and is 14 miles south of the city. The Clifton campus has a mix of architecture– from Victorian style to ultra-modern buildings and at its heart you’ll find the Royal Fort Gardens, a green space for students to enjoy.

The university has 3,000 different study spaces to choose from and if you want to keep fit during your studies, the Clifton campus has an indoor sports centre, health and fitness suite and sports medicine clinic.

Cost wise they range from £90 a week to £199 a week. Some are directly on campus, while the furthest is 2 miles from campus. You can choose an accommodation that is catered, self-catered, single-sex, or alcohol-free. Many also have communal spaces for studying or socialising.

Accommodation in the Stoke Bishop area is known to be the most sociable. Campus Houses and The Hawthorns are great for those who don’t want a commute to class. And the accommodation in the city centre is run by a private company and is surrounded by bars, shops, and restaurants– and is only a 15 minute walk to campus.

Does Bristol have a good nightlife?

Bristol is known for its clubbing scene. Whatever your taste is, the city is sure to have it. Mainstream clubs stick to the pop hits, underground venues play indie music, LGBT+ bars offer an inclusive experience, and themed clubs give you an excuse to play dress up for the night. Many clubs, pubs and bars offer “student nights,” which can include cheap or free gigs and discounted drinks. Live music is a Bristol staple and famous artists frequently visit, such as Stormzy.

Lakota is Bristol’s oldest and most famous club and definitely worth a visit. The Trinity Centre has a monthly “Bump Roller Disco” and The Old Market Assembly has a lively LGBT+ scene and themed parties. Pub crawls are common for students, where they hop from pub to pub all night.

The Bristol Students’ Union, one of the oldest in England, also hosts weekly programmes and events for students such as karaoke and quiz game nights.

Will I be able to find a part-time job in Bristol?

Outside of the university many students find jobs at the Mall at Cribbs Causeway and Cabot Circus available.

27% of the working population walk or bicycle to work in Bristol– the highest rate in England and Wales. If you don’t want to climb the treacherous hills of Bristol, buses are the main mode of transport within the city. First Bus, the main bus company in the city, offers a 30% student discount, and unlimited travel on First buses for a month will cost you £55. To travel outside of Bristol, it is a 30 minute walk from campus to the nearest rail station. For only a few pounds, you can take a 20 minute train to Bath and enjoy a day of shopping and sightseeing.

If you want to take the scenic route, the Bristol Ferry offers waterbus services with seven stops along the river. Bristol also launched e-scooters in November 2020 for a quick and energy efficient way to get around.