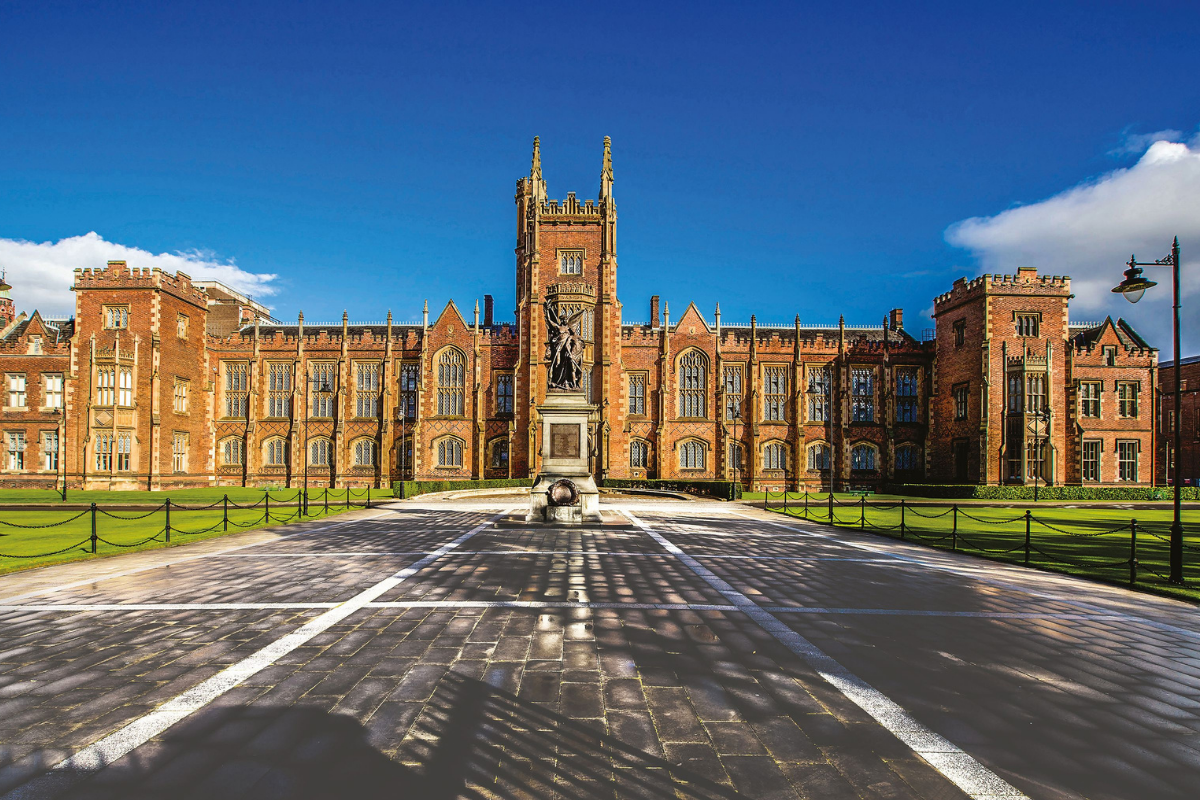 Thinking of applying to Queen’s University Belfast as an international student? Then read our guide to get our insights on what the uni and city are really like.

What are the best things about studying in Belfast?

If you’re an art lover then you’ll love Belfast, which is chock-a-block with street art and murals. Just check out Hill Street and Talbot Street for a stunning array of public art. And there’s a bit of everything for everyone – like the homage to RuPaul’s Drag Race on Little Donegal street.

And if you are a fan of the film Titanic, then look no further, as this city is where the ill-fated HMS Titanic was built. There are also some pretty cool nautical-themed museums too – check out the Titanic Belfast Museum or hop aboard the HMS Caroline and SS Nomadic to learn a bit more about Northern Ireland’s maritime history.

As Belfast is the capital city of Northern Ireland, it’s also well connected. Belfast has two airports, Belfast International Airport and George Best Airport, which have direct flights to destinations in Europe and the United States.

And if you’re looking to save on your student budget, then this might be the city for you. In 2020, the Natwest Student Living Index revealed that Belfast has the lowest student rent in the UK. 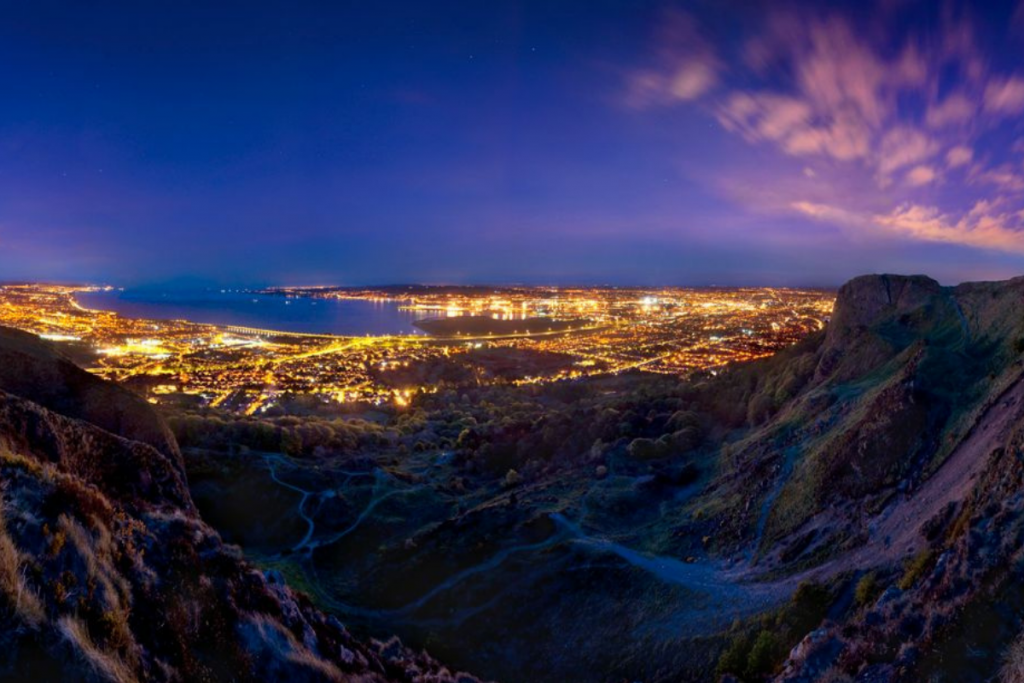 It’s no secret that Belfast has had a tumultuous past. Belfast was the centre for “the Troubles” – a period of intense conflict between Roman Catholics and Protestants over political independence from England amongst other issues. Nowadays, Belfast is a safe city for students, but scars do remain. Be aware that religious sectarianism and Northern Irish independence are still sensitive topics in Northern Ireland and that discussions about politics or religion are worth avoiding.

And with an average of 231 days of rain per year, the weather in Northern Ireland can be wet. So, if you hate having to lug your umbrella with you everywhere, it’s perhaps best to skip Belfast.

The 2011 Census revealed that only 3.6% of the total population of Belfast are from an ethnic minority background, in contrast to the 13% average across the UK. Nevertheless, there are a sizable number of international supermarkets in Belfast, including Indian Grocery shops on Sandy Row and a large East Asian supermarket on Ormeau Embankment.

There are also numerous places to worship in the city centre, including a mosque, a Buddhist centre and a Hindu temple.

Well, the HMS Titanic! Sadly, we all know how that story ends, but on the day the Titanic was launched from Belfast Lough, it was said that the whole city of Belfast came out to celebrate.

And Belfast is the home to Titanic Studios, which films HBO’s fantasy franchise Game of Thrones. Although the show shoots on location around the world, the Iron Throne is found in Belfast. 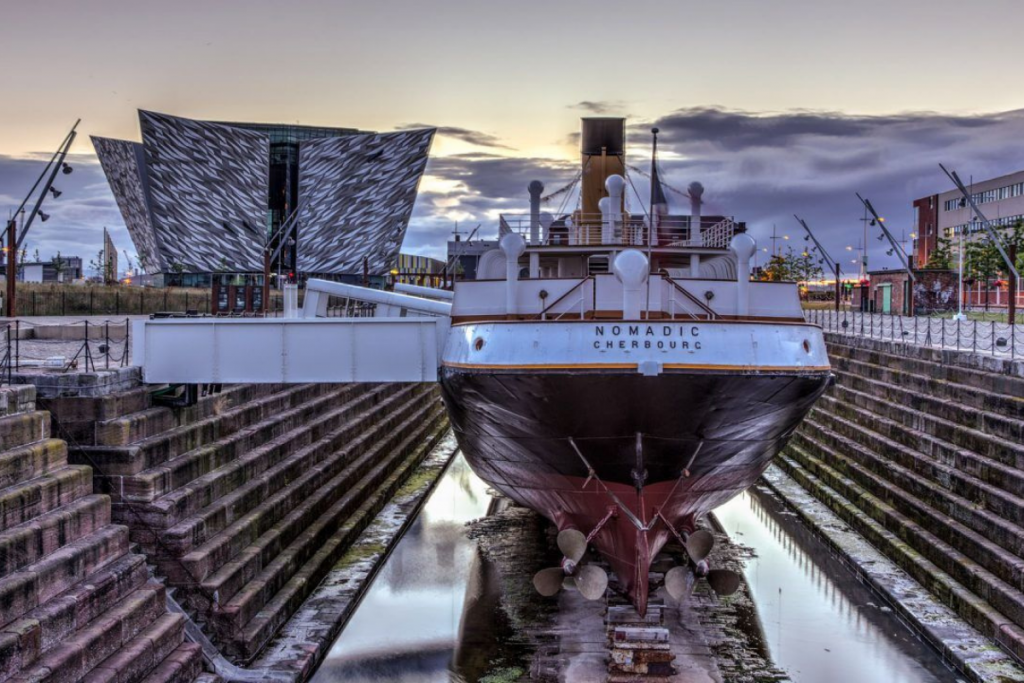 Where does Queen’s University Belfast rank?

According to the Times Higher Education rankings, Queen’s University Belfast ranks in the top two hundred universities worldwide and is 43rd in the UK. It is particularly well regarded for Engineering & Technology and Computer Science.

How much does it cost to study at Queen’s University Belfast?

Tuition starts at £16,900 per annum for humanities degrees and £20,000 per annum for science degrees. Medical degrees start at £20,960 for the first two years of university and then go up to £39,625. This is relatively affordable in comparison to tuition fees at other Russell-Group universities.

Stunning! The campus is home to the beautiful Lanyon building, as well as an art gallery, cinema, and even a rock-climbing centre. Everything you could possibly need is within walking distance, including the library and faculty buildings.

Queen’s University Belfast has a range of student accommodation, which mostly lies off-campus in the city centre. There’s specific accommodation for international students, post-graduate students and students with families, and there are dedicated no-alcohol residences too. Accommodation prices range from £85–£185 per week.

Does Belfast have good nightlife?

Yes, there is an eclectic mix of pubs, bars and nightclubs in Belfast. Venues not to miss include Bert’s Jazz Bar on Skipper Street, which has a 1930s New York theme, and The Filthy Quarter, a basement bar and nightclub on Dublin Road. Popular student drinking spots include Laverys on Bradbury Place and The Speakeasy in the Student Union.

Will I be able to find a part-time job in Belfast?

It should be easy to find part-time work in the city centre, given the sheer amount of watering holes (aka pubs and bars) in Belfast. But if retail work is more your thing, then try giving in your CV in Victoria Square – the largest shopping centre in Northern Ireland. And Queen’s University Belfast has a range of jobs on campus that are specifically for students.

Honestly, fairly good, given that Belfast has two airports. There’s also a direct rail link to Dublin Airport if you choose to fly in via Dublin instead.

And there are pretty good transport links via rail and bus to beauty spots across Northern Ireland. If you’re a Game of Thrones fan, then you can catch the bus from Belfast to Castle Ward (Winterfell) or Cushenden Caves which feature the backdrop to the Stormlands. Of course, if you’d like to travel to Scotland or England, then you will have to take a flight or a ferry to cross the North Atlantic Ocean.

And given its small size, you can walk pretty much anywhere in Belfast – the journey from the city centre to the university is only a fifteen-minute walk. But if you don’t really feel like walking, you can always hop on a bus across the city by using Belfast’s MetroLink.

What’s different about studying in Northern Ireland vs England?

Undergraduate degree lengths take the same three years to complete in Northern Ireland as they do in England, so there aren’t too many obvious differences, other than contrasting accents and dialects. The Northern Irish accent is known as “Ulster English” and differs widely from both the English accent and the Irish accent “Hiberno English.”

And the only other difference is that Northern Irish students tend to be happier than their peers in England…Yes, you did read that right. A 2020 report from the Higher Education Policy Institute revealed that students in Northern Ireland have the highest levels of wellbeing and student satisfaction across the UK.