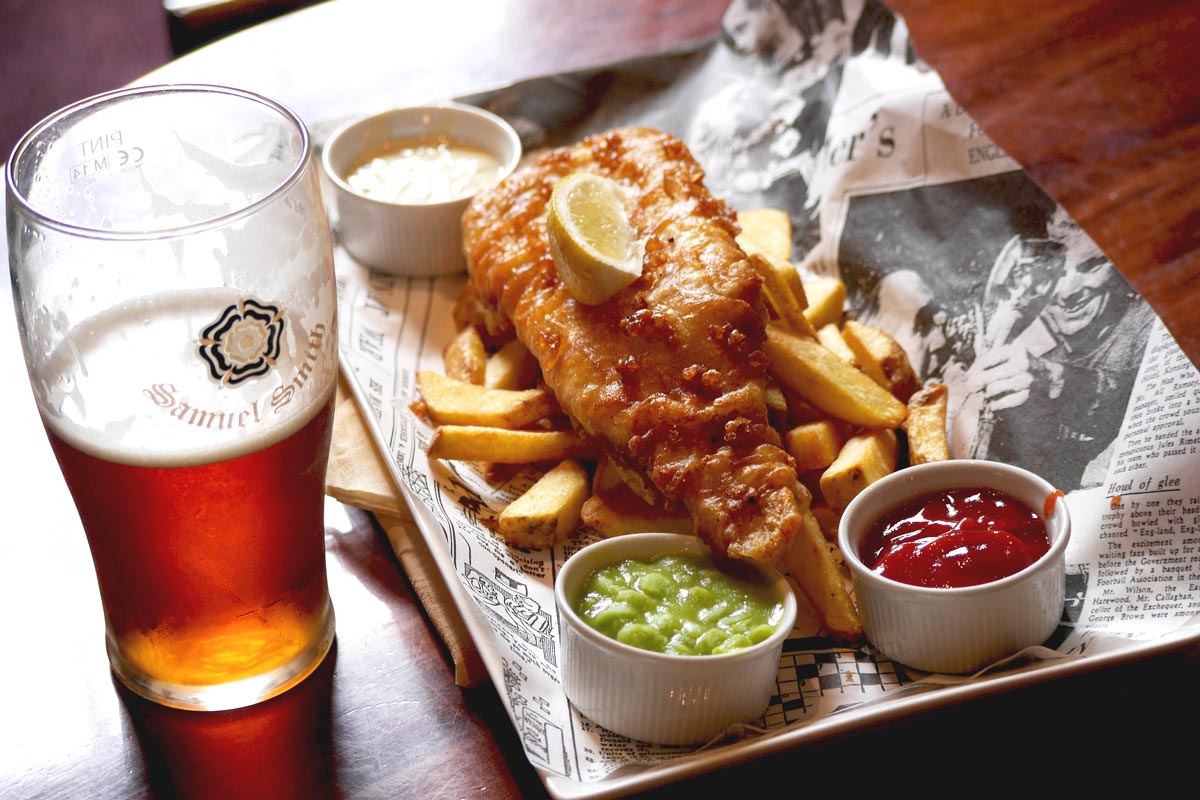 This article was written by the Great British Mag editorial team.

If there is one iconic dish that the UK is known for around the world it is fish and chips. This simple but finger licking meal is both humble and can be eat with your hands wrapped up in paper from a local “chippy” or in a smart restaurant. Either way there is no denying Brits love this dish with 382 million portions being sold every year by fish and chip shops alone.

The dish has two parts and the fish came first. The tradition of eating fish that had been coated with flour and fried in oil can be traced back to the early 1800s and its thought that it was bought to Britain by Jewish immigrants from Spain and Portugal, where fish was cooked in this fashion.

This style of cooking fish must have made a mark on the British culinary landscape because an early reference to it appears in Charles Dickens book Oliver Twist.

Then came the chips and the earliest record of chips being served in the UK was on the northern city of Oldham’s in 1860. A decade later the Belgium immigrants to Dundee also earned a living by selling fried potatoes. There are records of an immigrant called Edward De Gernier, selling this tasty snack to the workers and shoppers at the city’s Greenmarket.

But the main question of when this heavenly combination of fish and potato was combined remains a mystery. What we know is that both London and Lancashire claim to be the place where the meal was invented and true to the north and south rivalry this debate still rages on.

A fish and chips shop was opened in London in the 1860s by Joseph Malin, who came from a family of rug weavers that needed to supplement their income. They opened a shop selling fried potato and the young Joseph convinced his family to include fried fish to the menu, which became an instant success.

Others believe that an entrepreneur called John Lees was the first one to open a fish and chips shop in the UK. Records again, around the 1860s, record him selling fish and chips out of a wooden hut at Mossley market in Lancashire.

Regardless of who invented fish and chips the improved techniques of commercial fishing increased the availability and reduced the cost of fish which in turn catapulted the dish into a meal that the working classes could enjoy on a regular basis. And by 1930 there were more than 35,000 fish and chip shops across the UK. The number is somewhat reduced today to around 10,500, but this still means fish and chip shops massively outnumber other fast-food places, such as McDonalds which has about 1,200 outlets across the UK. 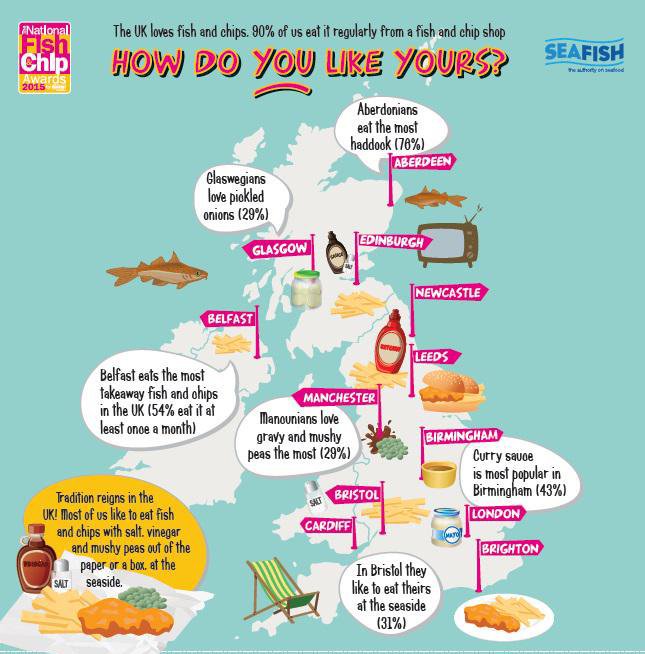 What condiments go with fish and chips

What condiments and side dishes should be served with fish and chips is as fiercely debated as who invented the dish.

What you put on your fish and chips and what you eat with it differs from region to region in the UK.

In recent times John Lennon was noted as saying he enjoyed his fish and chips smothered in ketchup and Michael Jackson liked them with mushy peas. But the dish originally was served with just a sprinkle of salt.

John Lennon enjoyed his fish and chips smothered in ketchup and Michael Jackson liked them with mushy peas.

The standard condiment remains salt and vinegar across the UK, apart from a few places, most notably Edinburgh where fish and chips get served with salt and a brown tangy sauce called “chippie sauce”. 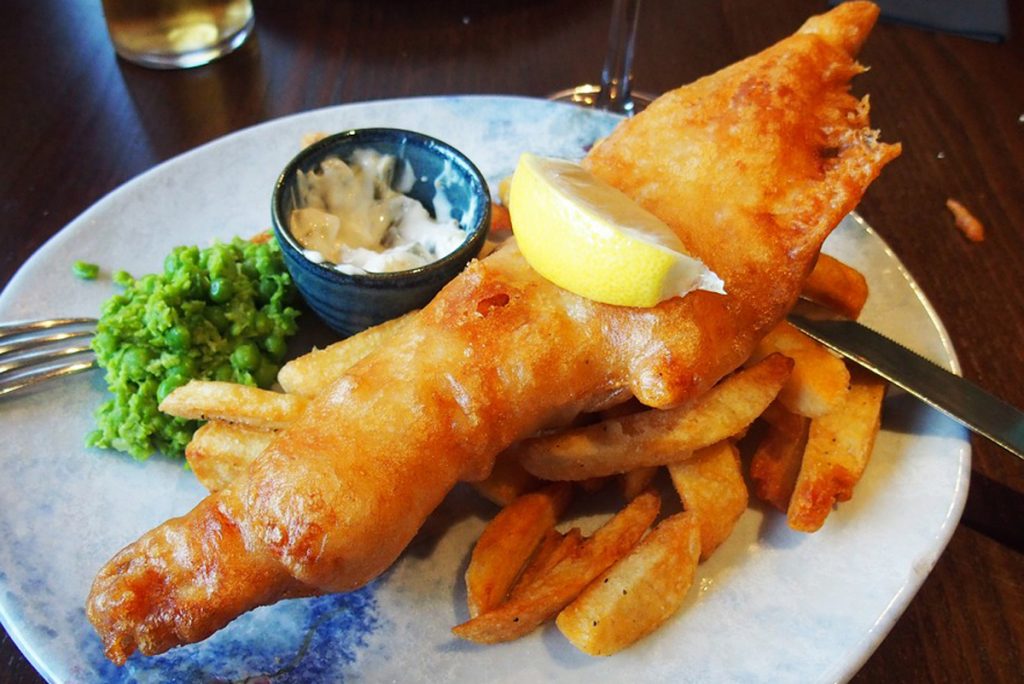 In England, a portion of mushy peas is a popular side dish as are a range of pickles that typically include gherkins, onions and eggs. And in Ireland, Wales and England, most takeaways serve warm side portions of sauces such as curry sauce, gravy or mushy peas.

The sauces are usually poured over the chips. In some areas, this dish without fish is referred to as ‘wet chips’. In the Midlands especially, chips with mushy peas or baked beans is known as a “pea mix” or a “bean mix”.

And then there are ‘scraps‘ also known as ‘bits’ in Southern England and “scrumps” in South Wales. This are simply bits left from frying the fish and are given to the customer on request.

When did the first fish and chip restaurants open

Fish and chips are the UK’s original version of fast food and were originally either eaten at home or served in newspaper and eaten with your hands. But in 1896 a man called Samuel Isaacs had a different vision. He wanted to elevate the dish to a restaurant experience and he opened his first fish restaurant. Isaacs’ first restaurant opened in London in 1896 serving fish and chips, bread and butter, and tea for nine pence and its popularity ensured a rapid expansion of the chain.

The restaurants were carpeted, had table service, tablecloths, flowers, china and cutlery, and made the trappings of upmarket dining affordable to the working classes for the first time.

Why we eat fish and chips on a Friday

What happens at British picnics?