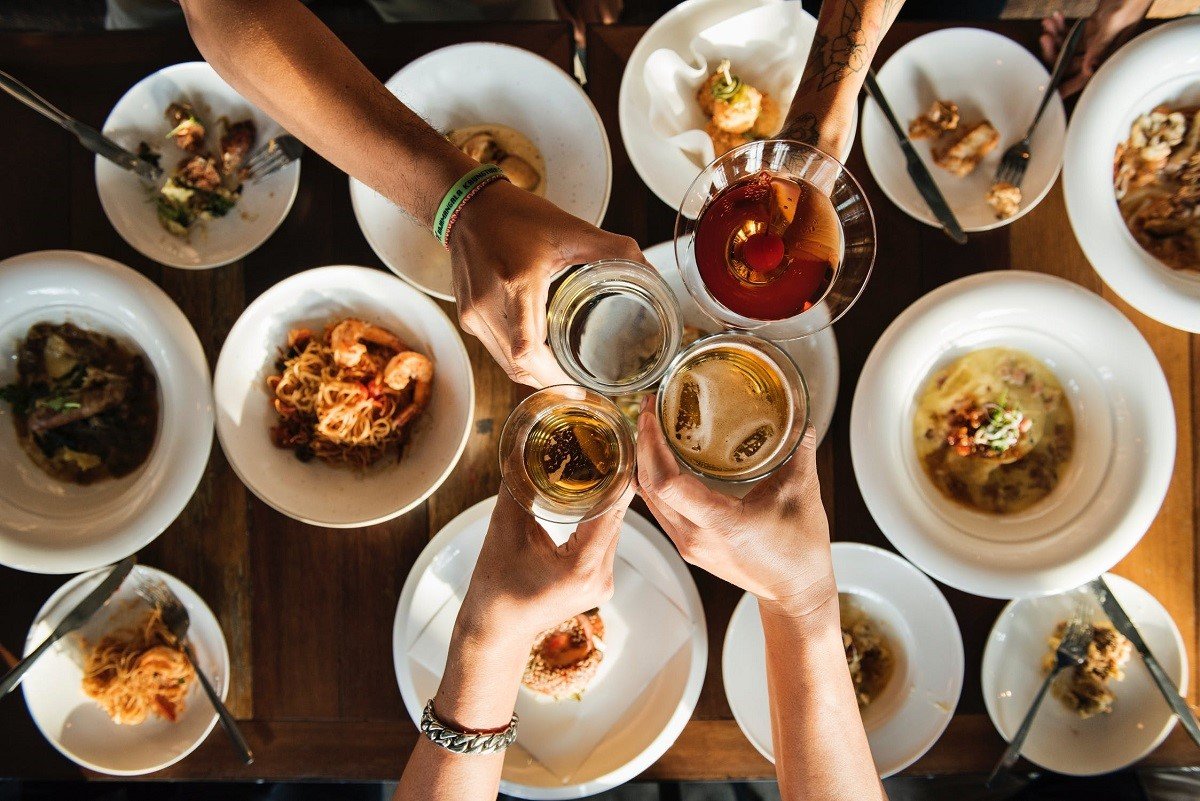 This article was updated by the Great British Mag content team on 23 November 2021.

Although the British Empire collapsed decades ago, its colonies left an indelible mark on British cuisine. Asian, Middle Eastern, African and Caribbean foods are as much a part of the British culinary landscape nowadays as shepherd’s pie and trifle.

And we’re not talking about watered-down, Westernised versions, either. These foods are as fiery and flavourful as what you’d expect to find in your home country. Authentic cuisine is easy to find thanks to the large immigrant population. People from all over the world live in Britain, and lucky for us they have brought their traditional foods with them.

Now, this isn’t to say that the British cuisine scene is perfect. It can be nigh impossible to find authentic food from the Americas, even in big cities. Central and South American food is not well-known in the UK so finding Peruvian or Guatemalan cuisine is very difficult. There are some Mexican restaurants, but they are difficult to find and often inauthentic; and while lots of places say they serve “American food,” this usually just means that they serve hamburgers.

Nevertheless, Brits have a huge appetite for foreign foods—especially these ones.

In Britain, curry is king. Every big city in the UK has an entire road dedicated to authentic curries. London has Brick Lane; Manchester has “Curry Road;” Birmingham has “the Balti Triangle.” From Pakistani to Sri Lankan to Thai to Japanese, you can get an authentic curry from every region of Asia. Even if you are not in an Asian restaurant, you will likely see curry on the menu. There is even a National Curry Week in October!

The first British cookery book containing an Indian curry recipe was published in 1747. It called for chicken, cream, and only three spices: pepper, turmeric, and ginger. Early British curries tended to be watery and bland by modern standards, but they were nevertheless very popular. Only rich Brits could afford all of the spices that went into a curry, so this beloved dish was a status symbol for a very long time.

Thanks to its large Afro-Caribbean community, the UK has a mouth-watering array of authentic Caribbean restaurants and shops. Jerk chicken is easily the most famous, but foods like goat curry and fried plaintains are also staples in Caribbean restaurants across the country. They tend to be a little more out of the way, so you’ll likely have to go to your local Caribbean neighbourhood to find them—but it’s worth the trip just to taste the authentic family recipes.

Caribbean food was brought to the UK after World War II, when many Caribbean families migrated to the UK for work. For a long time, they struggled to cook authentic food because almost none of the ingredients were available in the UK. Nowadays it is much easier to get critical ingredients such as plantains and Scotch bonnet peppers.

Arriabata? Puttanesca? Carbonara? Bolognese? Okay, that last one isn’t an authentic Italian dish (no, really!), but however it’s prepared, Brits love spaghetti. They love all pasta, in fact, and eat heaps of it. Pay a visit to your local Italian deli to pick up the really fresh stuff or enjoy lunch at one of the hundreds of Italian restaurants scattered across the country. You may have to do a little research to find a truly authentic place but it’s well worth the effort.

Like curry, Italian food was once a status symbol in the UK. In the 1960s and 1970s, rich Brits were able to afford luxurious holidays to Italy. This gave Italian cuisine an air of exclusivity and spaghetti was often served at dinner parties as a way to impress the guests! At the same time, many Italians were immigrating to the UK. They brought their traditional recipes with them and many set up restaurants which are still open.

It’s not, strictly speaking, a dish, but we had to include peri-peri on this list. Also known as a bird’s eye chili or Thai chili, peri-peri is a spicy pepper grown in African countries like Nigeria, Zimbabwe and Mozambique. It’s commonly used in African and Thai cuisine…and by Brits to spice up their chicken dishes. Peri-peri spice mixes, sauces, and marinades are all popular ways to add fiery flair to foods.

Like all spicy peppers, peri-peri is originally from the Americas. It was brought to Africa by slave traders and made its way further east to India and Thailand thanks to Portuguese sailors. Peri-peri chicken is actually a popular dish in Portugal, but the easiest way to try it in the UK is to go to everyone’s favourite chicken chain, Nando’s.

After a late night out, nothing tastes better than a hot, greasy döner kebab and a side of chips. Kebab shops are everywhere in the UK and many serve a fast food version of döner kebab, İskender kebab, or shish kebab. If you move beyond the fast food shops around your uni, however, you’ll discover a world of authentic Turkish, Iranian, and Afghani dishes.

Kebabs are a very old food—the first written record of them dates back to 1377! They likely originated in Turkey where soldiers would spear meat on their swords and roast them over a fire. The beloved döner kebab, however, is a much more modern invention: it only dates back to the early 1970s, when Mehmet Aygün, a Turkish man living in West Berlin, thought to wrap the meat and veg up in a pitta. This made it easy to carry away and the takeaway dish became popular with people who liked to drink late into the night.

Being next-door neighbours with France certainly has its perks. Croissants are beloved breakfast staples in the UK and you can find them just about anywhere. Brits happily scoff down even the cheapest and most inauthentic croissants, but we recommend skipping the weird, squashy ones from the supermarket and visiting a patisserie instead. Look for ones with distinct, flaky layers and golden brown tops.

Croissants were actually invented in Vienna in the 1830s, but they quickly became popular in France as a luxury item. Brits were introduced to the flaky pastry shortly thereafter; Charles Dickens, a popular Victorian writer, mentioned them in his letters. However, they were still considered a luxury item and not widely eaten until the 1980s, when croissants started to become mass-produced. Generally speaking mass-produced croissants are not as good as handmade ones due to the pastry’s delicate structure.

You can find family-run restaurants and takeaways in every British city, each serving the classics from their home province in China. Cantonese and Sichuan (often spelled Schezuan) are both particularly popular, but it’s easy enough to find Hunan, Shanxi, Guangdong, and all other Chinese cuisine styles. Visit your local Chinatown and let your palette run wild.

Brits have been eating Chinese foods for centuries. Thanks to trade, port cities like London and Liverpool have had links with China since the 1800s. The oldest Chinese community in the UK is in Liverpool, where Chinese sailors married British women and settled down. The British public’s first taste of Chinese food, however, was in London at the 1884 International Health Exhibition. Chefs, ingredients, and decorations were shipped in from China – and the food was a smash hit with the public.