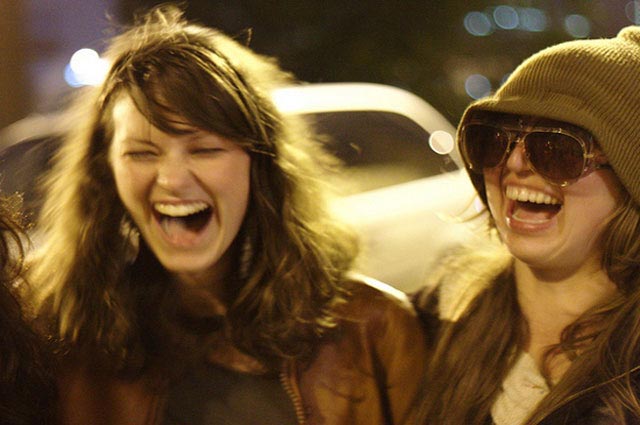 Confused by what Brits find funny? And are you the last to get the joke? Well admittedly British humour is hard to pin down because what we consider funny is far-reaching and almost no subject is taboo. And that includes poking fun at the Royal Family and people in the public eye, including politicians.

Even though British humour is as varied as British weather! these are the main forms of humour that we indulge in.

We Brits love sarcasm and irony as much as we like dipping biscuits into tea (probably more so, in fact). Sarcasm is often used in the form of saying one thing but actually meaning the opposite. For example saying “I love your moves on the dance floor” to a friend who is a terrible dancer.

An understatement is very British. It’s when someone deliberately makes out that something is less significant than it is. For instance, by saying “It’s a little bit windy, isn’t it?” when there’s a raging hurricane outside is an understatement. It’s probably due to the British tendency of wanting to play things down. ‘Deadpan humour’ (making a joke without smiling) is one element of understatement.

Satire involves using biting humour to criticise people and institutions with power, like politicians. Satire is popular in the UK because Brits love taking people “down a peg or two” (humbling them when they get too arrogant). There are many comedy shows dedicated to exactly this, including Have I got news for you and Charlie Brooker’s Weekly Wipe.

Absurd humour focuses on the silly, ridiculous or surreal. Much of British comedy is about noticing the absurd things in everyday life. Like the way everyone squishes onto the train even though there is another one in just one minute. Luckily, Brits usually tend to see the funny side of this. This kind of comedy is best done by stand-up comedians, including Jimmy Carr and Peter Kay

Banter is basically a jokey conversation between friends that involves good-natured teasing. Along with crisps and quizzes, it’s a big part of pub culture in the UK. So while you’re studying here, make a point of socialising with some locals – that way you can perfect your bantering skills.

The Brits aren’t shy of a joke that involves a sexual innuendo. Of course there are varying degrees if you take comedians like Julian Clary and shows like It’s Not the Nine O’clock News and films like the classic Carry On you will see that there are certainly no taboo’s but generally people take their guide from the social situation and who they are with when making this kind of joke.

As much as Brits are entrenched in the class system, everyone loves poking fun at everyone else. Over the year’s there have been some classics dedicated to every run of the social ladder, including Keeping up Appearances and Jeeves and Wooster.

One of the main differences between British humour and the humour of other nationalities is that we enjoy the cringeworthy. This is perfectly demonstrated in the film Four Lions and the legendary TV series League of Gentleman.

Brits are sometimes perceived to be uptight or socially awkward – saying and doing things at the wrong time. And this even makes us laugh!The caricatures of British social ineptitude is personified in Mr Bean and The Office.

The UK has a number of hit sitcoms where nothing much happens apart from everyday life. There are no knee-slapping moments but a lot of cringeworthy moments when you can’t believe someone has done or said what they have.

These sitcoms are subtle to say the least but they are genius at the same time. The best include Gavin and Stacey, I’m Alan Partridge and The Royle Family.

So there you have it – a quick rundown of what tickles our national funny bone. But the best way to understand British humour is to watch some of our comedy shows. Go on – you deserve the break from studying!

10 Black Britons you should know