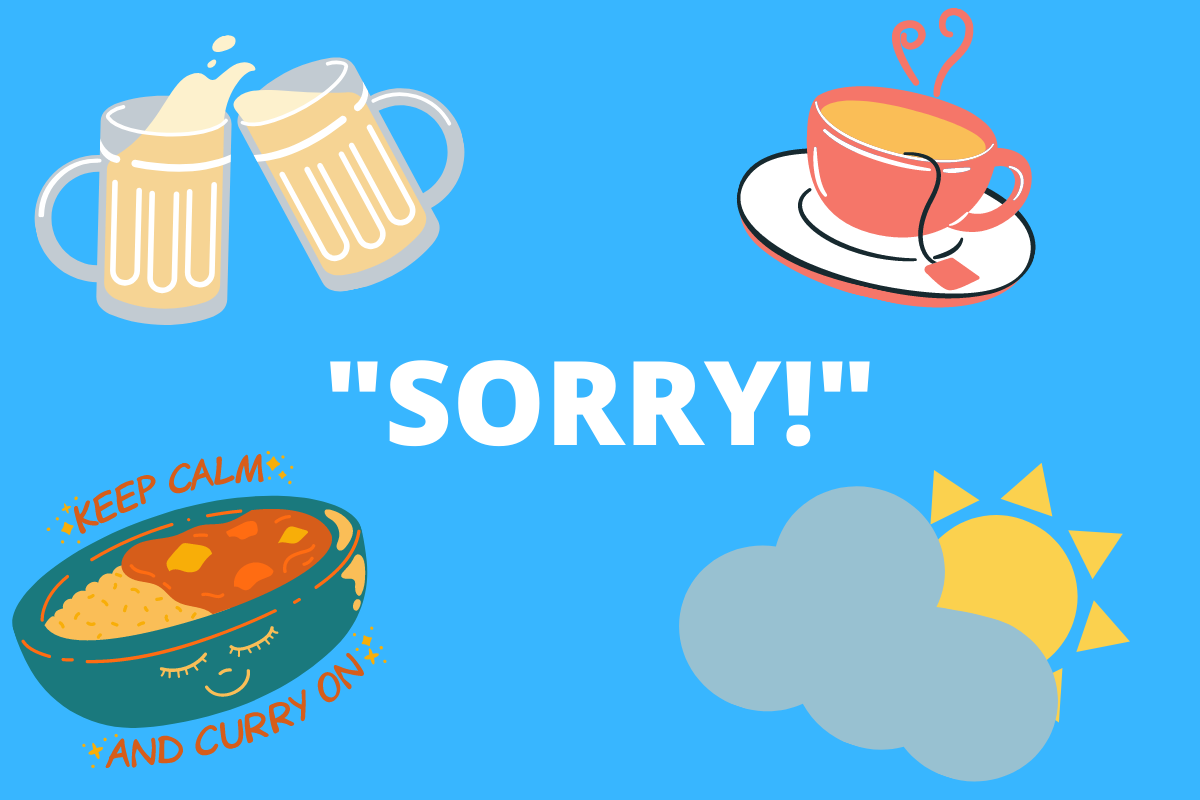 If you’re heading to the UK or have recently arrived – welcome! Let us give you a crash course on British culture, which can often be subtle, seem contradictory and will be different to what you are used to.

Bumped into someone? Say sorry before walking away. Need to get someone’s attention? Start your sentence with sorry. Need to squeeze past someone in a crowded room? You guessed it – say sorry as you move past.

Sorry is widely used to qualify a whole host of things and can quite frankly get very confusing, especially if you are left wondering why you are being apologised to. Just remember that it’s the Brits way of being polite and our need not to inconvenience others.

2) Brits are fussy about queuing

Brits are famous for their love of queuing and they take it very seriously. In the UK there is really no excuse for jumping to the front of the queue. Even if you are in a hurry you should not cut in front of others as this is seen as incredibly rude.

3) Talking about the weather is a national sport

Talking about the weather is practically the national sport in the UK. British weather can change in an instant and Brits like to say that one can experience four seasons in a day. Whether it’s hot or cold, raining lightly or chucking down hail, the weather is a source of endless entertainment and conversation.

Talking about the weather also plays into something we call “small talk” which is exchanging a polite, not-meaningful conversation with someone. And you guessed it – the most popular topic for small talk is the weather.

Whilst coffee is a popular hot drink in the UK, in our hearts we are a tea drinking nation and we down a whopping 36 billion cups of tea every year. So don’t be surprised if you are endlessly offered a “cuppa.”

Tea drinking is as much about having a break or a good old “natter” as it is about enjoying the drink – it’s the perfect way of making friends and finding out the latest gossip.

And whilst we are on the subject of how different the two types of English are, be warned, there are many words that don’t exist in British English that do in American English and a great many that mean something quite different – so be careful of what you say!

6) Curry is the national dish

In Britain, curry is king and Chicken Tikka Masala is the national dish! Thanks to the immigration of people from Pakistan, India, and Bangladesh, you will be able to find delicious and authentic curries from South Asia. London has Brick Lane; Manchester has “Curry Road;” Birmingham has “the Balti Triangle.”

You can also find food from most parts of the world in the UK thanks to how multicultural the country is – so whether you are craving a curry from Pakistan, Sri Lanka, Thailand or Japan, you’ll be able to find one.

7) The UK is made up of four countries

It’s worth noting that the United Kingdom is made up of England, Wales, Scotland and Northern Ireland and that each part has a devolved government with slightly different laws and a distinct culture. Accents can also vary and sometimes languages too – in Wales, Welsh is spoken alongside English.

On the whole, the rivalry between the different parts of the UK is good-humoured and seen mostly in sporting rivalry, especially in rugby.

In the UK we have over 50 accents which change noticeably every 25 miles – and very few of us sound like the Queen who speaks with a Received Pronunciation (also known as Queen’s English).

The theory is that the Queen does not have an accent as she is from the UK and those that do have an accent come from elsewhere or have been influenced by an accent from elsewhere (which is somewhat controversial) – but does have some truth to it.  For example, those who hail from Liverpool have an accent that is a melting pot of Welsh, Irish and even Scandinavian accents because the city was a major seaport.

9) British humour is full of sarcasm and banter

British humour is world renowned for being a bit odd, but at the same time we have successfully imported our brand of humour to the world. Think: Mr Bean, Gavin and Stacey, and Fawlty Towers.

Whilst it would be impossible for us to explain all the different types of British humour, it is safe to say that you will come across a lot of dry, sarcastic humour that is subtle – making it hard to know when someone is cracking a joke.

Also, there are are very few taboos and Brits love to poke fun at their politicians and people in the public eye, including the Royal Family.

It would be an understatement to say Brits love to go to the pub. It is a place to socialise, eat, drink, watch sport and take part in the great British pursuit that is called the “pub quiz”.

Pubs are friendly places, so don’t worry if you don’t drink alcohol because you can always get a “soft drink.” But remember the golden rule: Always buy your round!

This is a central part of pub etiquette and means that you will have your drinks bought for you by the people you go with – and in return, you should NEVER leave the pub until you have bought them a drink.