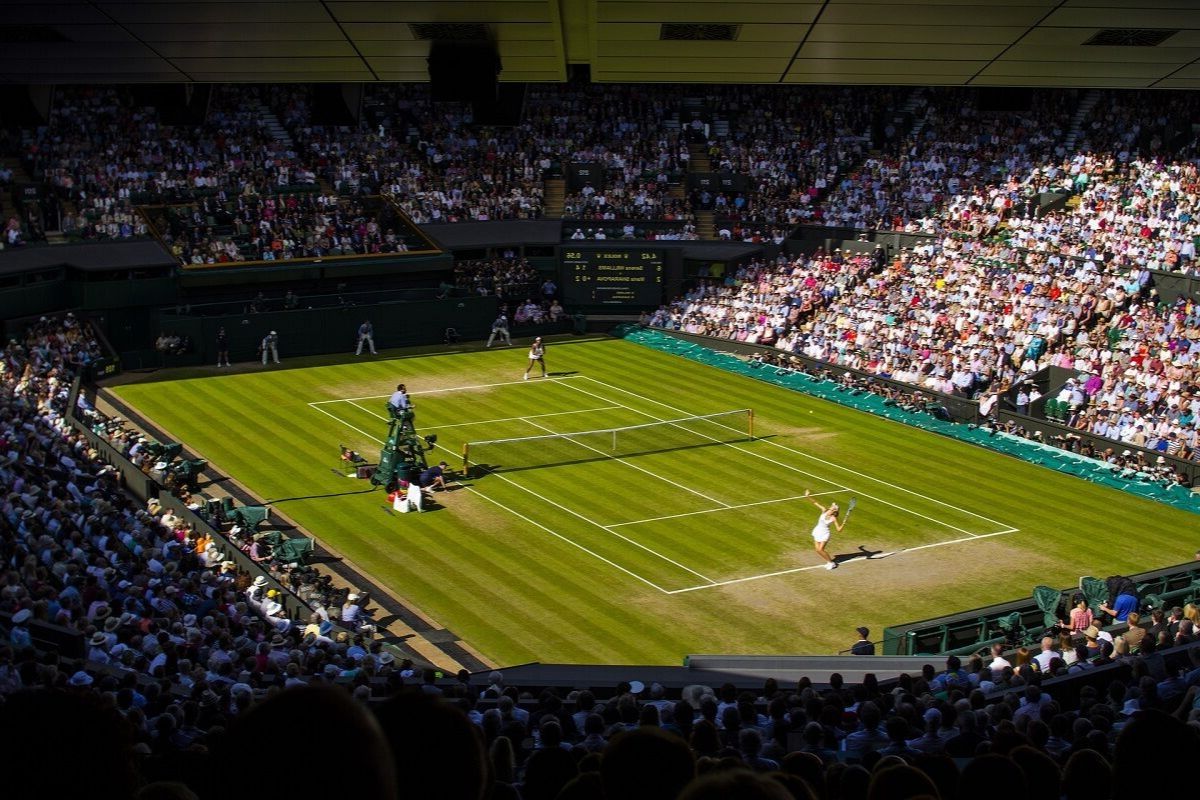 07This article about Wimbledon was published by the Great British Mag content team on 14 June, 2018


The world’s most famous tennis tournament is under way again at the All England Lawn Tennis and Croquet Club, in Wimbledon. The two week tournament attracts 39,000 spectators every day, including royalty and celebrities. Everyone is keen to watch the world’s best tennis players compete for the coveted silver trophy.

For the duration of Wimbledon the Brits become obsessed with tennis and dust off their old raquets to have a “hit” at their local courts. Knowing a bit about the tournament will help you join in the inevitable conversations about Andy Murray’s form and the condition of the grass courts.

1) Wimbledon is the oldest tennis tournament in the world

The first Wimbledon championship took place in 1877. Men’s Singles was the only event played that year. Ladies’ Singles and Men’s Doubles events were introduced in 1884. The Ladies’ Doubles and Mixed Doubles events were added to the tournament in 1913

2) Tennis is a British invention

The game was invented in the UK by Walter Clopton Wingfield and was originally called “sphairistikè” – an ancient Greek word meaning “the art of playing ball.”

The first televised airing of The Championships, Wimbledon was by the BBC on 21 June 1937

The longest match ever played at Wimbledon took place at the 2010 tournament. John Isner of the United States defeated French player Nicolas Mahut in a match that lasted 11 hours and five minutes and was played over the course of three days

They remain on display at the All England Club’s museum and the winners go home with a small replica of the trophy.

At the time of this article, the record for the most Wimbledon titles in Ladies’ Singles belongs to retired Czech and American player Martina Navratilova with nine victories. In Men’s Singles, the record for most titles is shared by William Renshaw, Pete Sampras, and Roger Federer, who each won the event seven times.

7) 250 people are tasked with keeping track of the balls

About 250 ball boys and girls – known as BBGs – are hired and undergo intensive training to keep track of all those fast-moving tennis balls.

The balls are replaced after every seven to nine games to make sure they’re in perfect shape throughout the match. Those not in use are stored in a refrigerated container to keep them in tip-top condition

Umpires can ask a player to change if they don’t meet the dress code. For instance, in 2013, Wimbledon champ Roger Federer was told to switch his shoes for his next match because they had orange soles.

The grass is tended to year-round. During the event, it’s cut to an exact height of 8mm.