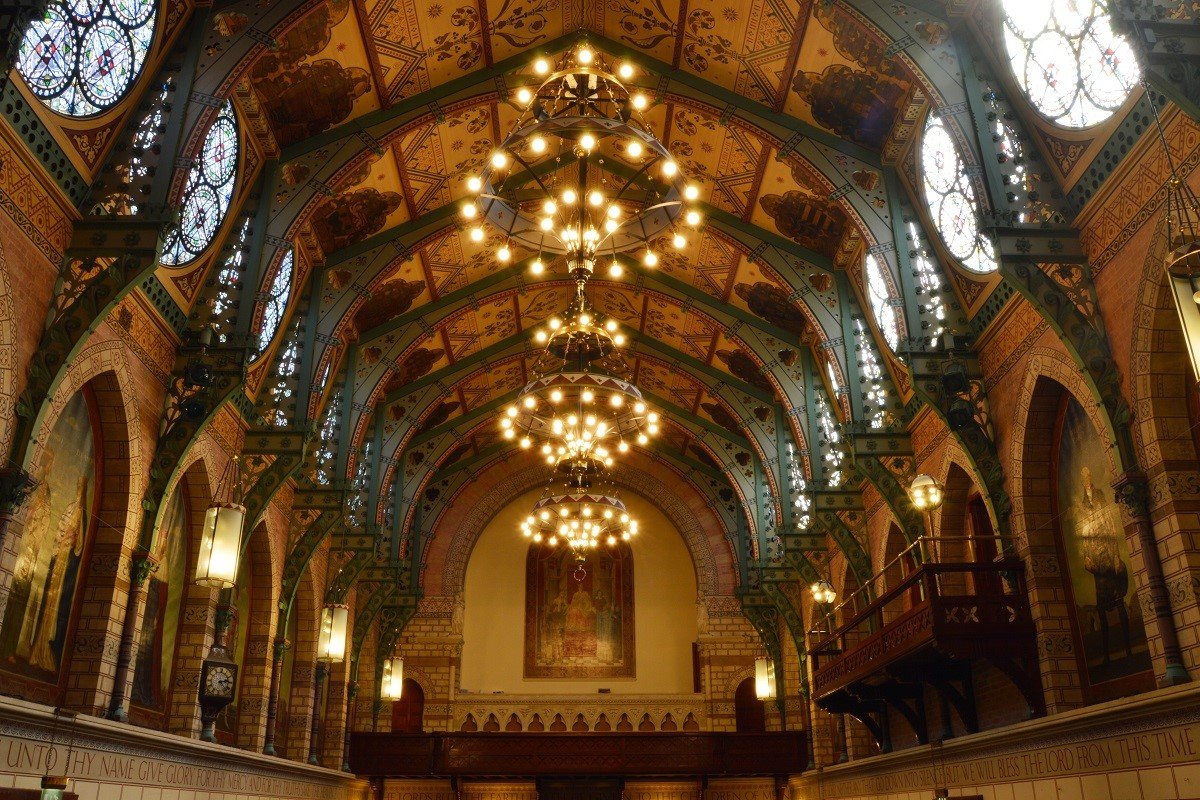 Northampton has been a shoe-lover’s paradise for decades. It was an epicentre of British shoemaking during the Industrial Revolution, and today it houses the world’s largest collection of shoes.

Sturdy footwear is a must, because Northampton is the perfect springboard to the British countryside. Northamptonshire is nicknamed the “squires and spires” because it is so full of stately homes and churches, many of which you can visit. But if history isn’t your thing, don’t worry – Northampton and the surrounding countryside are bursting with more modern entertainments, including Formula 1 racing, nonstop shopping, and global culinary delights.

2) There’s a maze of underground escape tunnels underneath Northampton’s ancient Market Square. They link multiple government buildings together, including The Guildhall.

3) The first ever University of Northampton was established by royal charter in 1261 by King Henry III. Call it a hunch, but we’re pretty sure Freshers Week looked a lot different back then.

4) Northampton is most famous for its shoemaking industry, which stretches back over 900 years. It once supplied the whole of Oliver Cromwell’s army with battle shoes. We’re not sure our halls can hold any more shoeboxes!

What to do in Northampton

Racing fans of all stripes will want to visit Northampton due to its proximity to some epic race tracks. Silverstone – the home of the F1 British Grand Prix – is just a 30-minute bus ride away. When it’s not hosting the Grand Prix or a classic car race, Silverstone offers plenty of opportunities to zoom around in race-prepped cars.

If you believe that you can never have too many shoes, you’re in the right place. The largest collection of shoes in the world can be found in Northampton Museum and Art Gallery, which has over 12,000 pairs and 50,000 artefacts. The museum is currently undergoing a huge expansion and restoration project and will reopen in 2020. We’re already counting down the days.

Those who love the royal family will want to stop by Althorpe House, aka Princess Diana’s childhood home. The stately home has been in the Spencer family for over 350 years and recently received a loving makeover. You can lay flowers for Princess Diana at her memorial by the lake where she was laid to rest.

For a classy evening in the lap of luxury, visit Northampton Filmhouse. The cinema only has 88 seats, so every single one is premium. They’re also made of luxurious leather and fitted with side tables. Sip wine from actual glassware or tuck into some local ice cream as you enjoy the latest blockbuster.

What to eat and drink in Northampton

Northamptonshire has a few regional specialites like ‘ock and dough (a kind of pie) and curd cheesecakes. You probably won’t see them on a menu, but if you do, be sure to give them a try so that you can taste Northamptonshire cuisine at its most authentic.

Give in to sweet tooth cravings and head down to Gallone’s Ice Cream Parlour. They’ve been producing ice cream in Northampton for decades using their traditional secret family recipe. Try their bite-size waffle pops smothered in rainbow sprinkles and soft vanilla ice cream or indulge in a classic cone full of your favourite flavour.

For coffee with a view, you can’t beat The Ark, a vegan café floating on the River Nene. Tuck into a plate of Charlie’s Famous Onion Bhajis as the café bobs gently in the currant.

If you’re after a proper British pint then head to The Mailcoach. The recently refurbished pub dishes up all the classics and has a huge gin selection. We go for a classic Hendricks and cucumber, every time.

Where to shop in Northampton

It wouldn’t be right not to add a couple of new pairs of shoes to your wardrobe when visiting the shoe capital of Great Britain. Pop into the only Dr Martens factory in the UK. It’s a short 25-minute drive outside of Northampton town centre and it’s the perfect place to pick up a pair of the popular army-style boots at a lower price.

Located next to Market Square, the Grosvenor Centre is a modern shopping centre. Boasting 59 high street favourites ranging from Topshop to New Look to Primark, it’s perfect for picking up everything from skinny jeans to stationary. Look out for their late-night shopping events and student shopping soirees. Come December, be sure to visit the festive Après Ski bar – it’s the perfect pick-me-up after you’ve shopped until you’ve dropped.