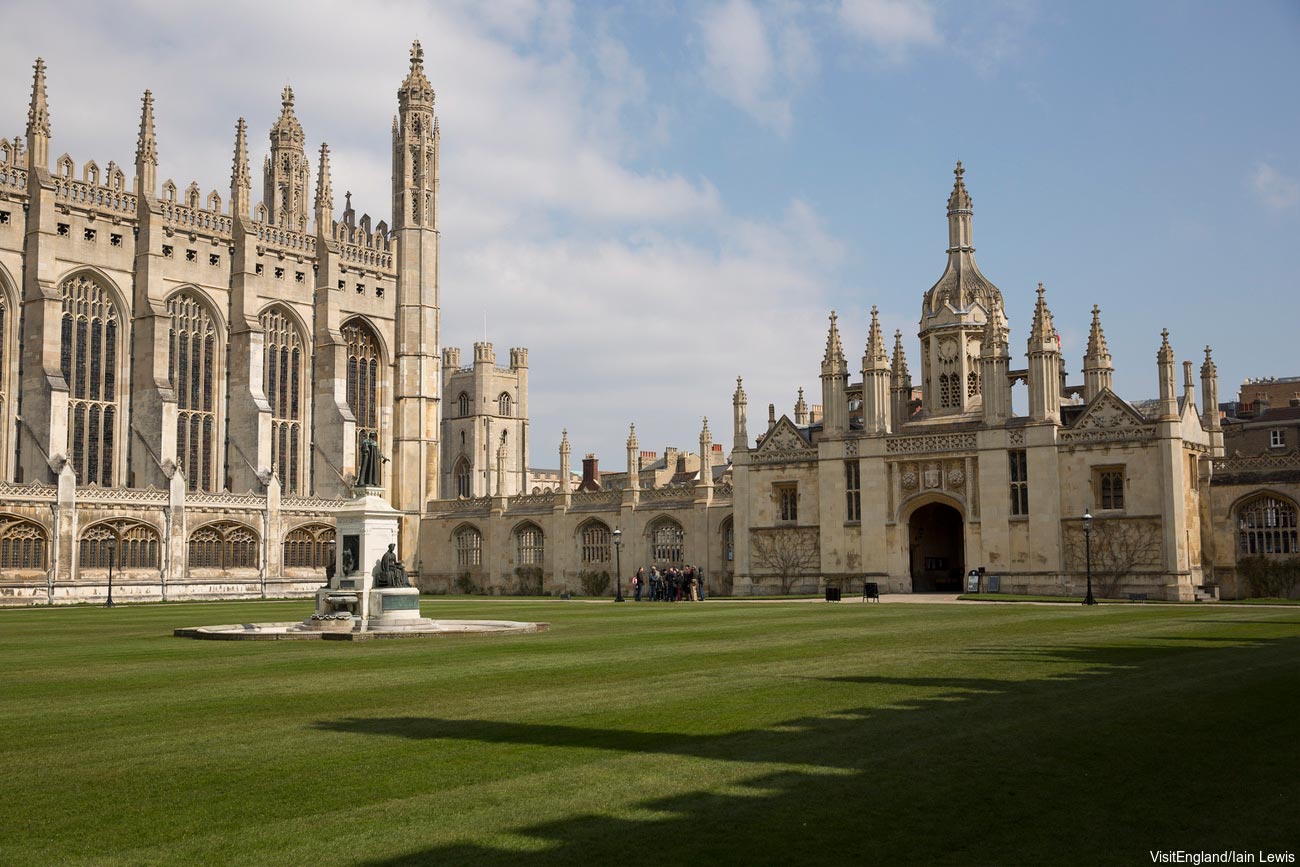 Steeped in tradition, surrounded by beautiful honey-coloured architecture and home to one of the world’s best universities, visiting Cambridge is a must. Miles of leafy meadows, babbling brooks and picturesque college buildings make it much more idyllic than its long-standing university rival. Sorry Oxford! The only way to explore the winding medieval lanes is by bicycle. Hire one with a wicker basket to hold all your picnic essentials in.

The two universities seem to always go head-to-head and just this year Oxford, for the first time in history, overtook Cambridge to become the UK’s best university in the QS world ranking. The start of their rivalry goes back 800 years, when a group of disgruntled pupils and masters left Oxford after having an argument about a murder and the hanging of three clerks. They eventually formed their own competitive university in Cambridge. Who knew!

One of the most famous buildings in Cambridge is the Kings College Chapel. This extraordinary example of gothic architecture took over a century to build and is filled with beautiful stained glass windows. During term time you can enjoy a free performance by the choir. Next, visit the gardens of Trinity Hall and stroll past the iconic Mathematical Bridge at Queens – it’s also a great spot for a selfie!

Take some time out to enjoy Cambridge University’s Botanic Gardens. Grab a Chelsea Bun from Fitzbillies (they’re world famous) and wander through the tropical rainforest and explore over 40 acres of sprawling lush greenery.

Make sure to stop by the magnificent Fitzwilliam Museum. The grand building displays over a million pieces of exquisite artwork and better yet, it’s free!

You can’t visit Cambridge without trying your hand at punting on the River Cam. Scudamore’s is Cambridge’s oldest punting company and has won a host of awards. Book one of their guided tours to see how the professionals operate the tricky wooden boats.

Surrounded by vintage vinyl and classic books, CB2 is a relaxed bistro serving up a Mediterranean inspired menu. Many of the people who hang out here are blossoming creatives or masters of the arts, so expect a soundtrack of experimental music and excited intellectual chatter. Be sure to check out their events schedule to catch live music acts, spoken word poetry performances and food tastings.

The Orchard was first made famous by Virginia Woolfe and the rebellious members of the Grantchester Group, who used to take their tea outside on the lawn instead of inside as required. Nowadays, it serves a heavenly afternoon tea served outside underneath a canopy of drooping willow trees.

Caffeine fixes and libraries go hand in hand (especially around exam time). And given its academic credentials, the coffee shop offering in Cambridge is up there with the best. Head to the Espresso Library for a rich cup of freshly roasted coffee, or opt for something a bit quirkier and have a brew in the Relevant Record Café. The Relevant Record Café combines a basement record store with a vibrant, upstairs coffee shop.

A posher version of the British pub, Pint Shop dishes up an array of delicious bar snacks such as homemade scotch eggs, crunchy pork scratching and crispy squid drenched in aioli. Settle down and attempt to try a few of their 23 craft beers.

Mill Road is a bustling bohemian part of the city; here you’ll find Bowns an independent, designer store stocking rare finds from the likes of Vivienne Westwood and Paul Smith.

Also worth a visit is Market Square. It opens seven days a week displaying an eclectic mix of Caribbean cakes, poetry from local writers and other interesting trinkets.

Act like a true British gent and spend the afternoon browsing the selection at Whisky & Cigar emporium or hanging out in their indulgent sample lounge.

G. David Bookseller is tucked away from the main high street, but once found will bring bookworms hours of joy. On top of the rows and rows of incredible bookshelves, there’s also a second room housing a treasure trove of vintage Shakespeare classics and collectible first editions.

Celebrating all that’s great and British, Jacks on Trinity is the ideal place to pick up souvenirs. Ranging from novelty key rings to stylish Cambridge tea sets, you can find lots of gifts for friends and family back home.