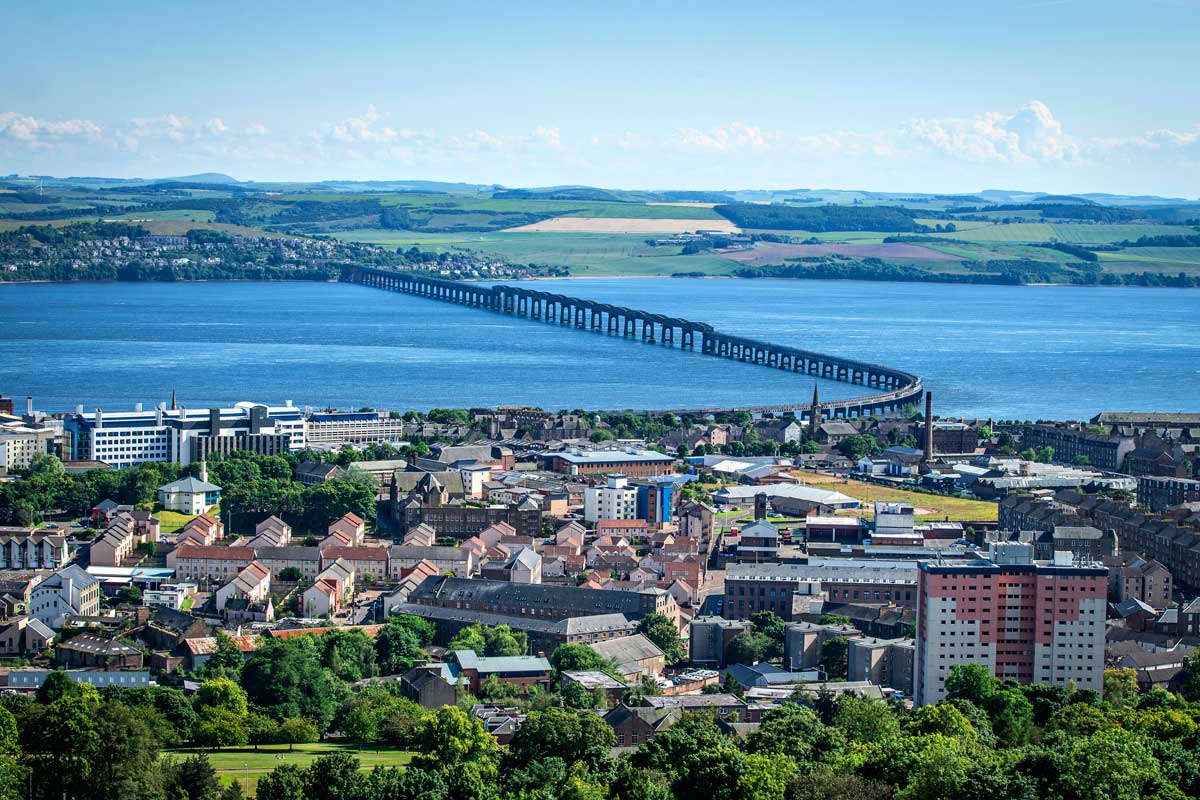 When planning a Scottish getaway, many travellers focus on the popular cities of Edinburgh and Glasgow and the rugged and dramatic landscapes of the Highlands. But only visiting these regularly frequented places will mean you miss out on one important stop—the enchanting East coast of Scotland. Here, nestled snugly into the Tay Estuary is Dundee—a seaside city that’s definitely worth adding to your travel list.

Once an industrial hub, Dundee has undergone rapid urbanisation over the past few years and is now a playground for creative types. In 2014, UNESCO recognised Dundee as the first (and only) City of Design in the UK.

The city also offers plenty of independent design shops and galleries, theatres, museums and botanical gardens. And the starlit views over the water at night are truly something else.

1) Dundee was known for three J’s in the late Victorian era – jute, jam and journalism. It was the global hub of jute, a strong natural fibre used to make clothing, accessories and household items. It was also the native home of mouthwatering jam, and the birthplace of many magazines and newspapers like The Sunday Post.

2) The inventor of postage stamps, James Chalmers, first proposed his idea for the stamp in Dundee in 1837.

3) Dundee is dubbed “the sunniest city” in Scotland. Now, who doesn’t love a bit of sunshine in the UK?

5) Any gamers out there? Grand Theft Auto’s mother company Rockstar North was founded in Dundee.

Celebrate the history and beauty of jute at Verdant Works, a museum showcasing a restored jute mill and fully-functioning original machinery. It’s the perfect place to spend an afternoon as it’s only 250m west of the city centre.

A fantastic, must-see gallery is the recently-opened V&A Dundee design museum. This is the only V&A outside of London and Scotland’s first design museum. This art Mecca opened its doors in 2018 and has been highly-acclaimed since. The building was designed by award-winning Japanese architects Kengo Kuma & Associates, who have also been commissioned to design the stadium for the Tokyo 2020 Olympics.

A distinctively modern building made up of curving concrete walls and stone panels, the V&A was built to look like Scottish cliff face. This is fitting as it sits right on Dundee’s waterfront. The gallery hosts major exhibitions, permanent design collections and Scottish heritage pieces. While home to many classical pieces, the V&A also promotes contemporary talent. And are there any Star Wars fans reading? You’ll get a first-hand look at the costume worn by Natalie Portman in Star Wars: Attack of the Clones!

Next head to The McManus, an all-inclusive package for fine and decorative art and natural history in eight stunning exhibition halls. It’s been part of the fabric of the city since 1867, and houses pieces spanning 400 million years of history.  The building itself is a classic example of Gothic-revival style. The designer, architect George Gilbert Scott, was an expert in restoring Medieval churches. So, he’s given the gallery an old European chapel like feel.

For great views of the city from the Tay Estuary, climb on a vessel with Pirate Boats Ltd at the quaint former fishing village of Broughty Ferry. It’s only five miles up the coast from Dundee. Don’t worry, once aboard you won’t be pillaging ships with Captain Jack Sparrow from Pirates of the Caribbean. Although, that may be disappointing news for some! Instead you’ll have the chance to take in views of the V&A, Broughty Castle and Larick Beacon lighthouse from the water. You’ll probably see a grey seal colony on your journey and if you’re lucky you might also spot a pod of bottlenose dolphins!

In the centre of town you’ll find the foothills of an extinct volcano called Dundee Law which you can climb up for a fantastic bird’s-eye view of the city. On top of the hill, you’ll find the plug of the volcano which has been turned into a memorial to deceased veterans  from both World Wars. On significant days like Remembrance Day the memorial is lit with a huge flame.

What and where to eat and drink?

Dundee is abound with culinary excellence. As one in three Dundonians eat a ‘peh’ (pie) a week, this is how we’ll start the list. A local favourite is “Dundee Peh on a roll” from Scott Brothers, which is essentially a burger with a Scotch pie in the middle. Savoury beef and vinegar mix to provide a one-of-a-kind taste.

Whether or not you’re new to the UK, chances are you will have noticed our passion for fish and chips. In Dundee, family-run Tailend is where you will find some of the best. Praised as one of the top 20 fish and chips restaurants in the UK, the seafood served by Tailend is sourced locally from Arbroath.

If your sweet tooth is aching, trying a slice of Dundee cake is the perfect solution. Native-brand James Keiller & Son (originally Keiller’s marmalade) invented this heavenly dessert typically made with currants, sultanas and almonds. The sweetness of the fruit blends with the moist cake to deliver a very fulfilling experience. Dundee cake can be found in a number of supermarkets and bakeries now, but family-run Clark’s Bakery is our top recommendation.

To finish off the night, pay a visit to Draffens speak-easy bar for a drink and some sing-along oldies. Located in the city centre, the brick-walled design, dim warm-toned lights and cozy atmosphere will take you back in time. Grab a seat in the basement and indulge in some groovy jazz music with a glass of mojito in hand.

Spex Pistols is an indie sunglasses shop bringing vintage and designer eye-wear to a more intimate setting. Besides the amazing array of sunglasses, there’s unparalleled customer service and great music. Bits and bobs like industrial furniture pieces and antique toys scattered around the shop make for a unique setting. Stepping out of the storefront and onto Johnston’s Lane, you’ll have a chance to snap a few photos in front of unparalleled Scottish street art. And for a fun fact about the store, it’s apparently the only place The Strokes guitarist Johnny Marr will buy his sunglasses in the UK. Rock on!

Dundee native Hayley Scanlan returned home to open her own namesake boutique on Perth Road after being trained by designers from London and LA. A two-time winner of the ‘Young Scottish Designer of the Year’ award at the Scottish Fashion Awards, Hayley’s cute and unconventional designs have appeared in magazines like Vogue, Grazia and OK! When you step into her store, Hayley will most likely be there to guide you through the collection herself. What’s better?!

Finally, take a stroll along Dock Street and Exchange Street. They’ve both been recently upgraded by adding a number of unique independent stores. So, head to these thriving lanes to discover lots of hidden gems! Dundee won’t fail to surprise you with what it has in stock.