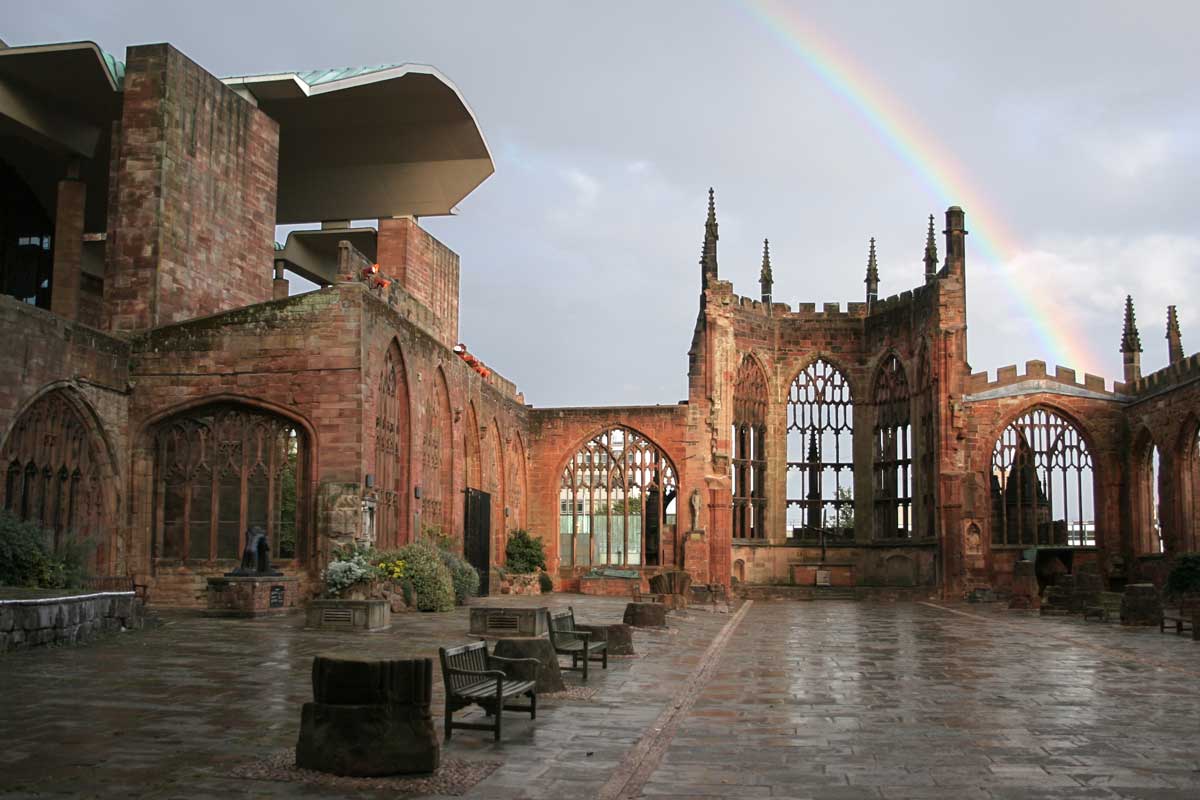 Coventry is perhaps most famous for being the home of the sleek, luxurious Jaguar car, but this buzzy city is a lot more than its car industry. Located in the centre of England, Coventry is a city that has seen its fair share of ups and downs. Heavily bombed during the Second World War, the medieval city has since rebuilt itself as a lively creative beehive.

Gearing up to become the UK’s City of Culture for 2021, Coventry is full to the brim with arts and culture. It’s home to two stunning universities, three cathedrals, plenty of chic indie shops – and some of the fastest cars in the world.

What to do in Coventry?

If you love cars, Coventry is a must-see. The (completely free!) Coventry Transport Museum has the biggest collection of British-made cars, motorcycles and bicycles in the world. Wander through an informative exhibition on the invention of the bicycle, car and tank – or skip all that and head straight for the fastest cars in the world, including the jet-propelled Thrust 2 and Thrust SSC. The latter is capable of breaking the sound barrier. Sadly, you can’t borrow it for a spin, but the 4D Land Speed Record Simulator can give you a taste of what it’s like to go supersonic.

Need to slow down a bit? Wander through the city’s biggest architectural stars. Coventry the only city in the UK with three cathedrals. (Okay, two of them are in ruins, but it still counts.) Check out the ruins of St Mary’s, which was destroyed in the 16th century; the remains of St Michael’s, which was heavily bombed during the Second World War; and Coventry Cathedral, a modern structure that was half-built off the ruins of St Michael’s. All three are in walking distance of each other and are well worth a visit. History, art, and architecture lovers will also want to check out the Holy Trinity Church; it boasts an impressive spire and a medieval painting depicting the destruction of the world. Finally, get a taste of Coventry’s rich culture with a visit to the Herbert Art Gallery and Museum. Enjoy modern and historical works of art or browse the old photographs and maps in Coventry’s archives. The Warwick Art Centre, which lies just outside the city centre, is a buzzy hub of creativity where you can catch plays and masterclasses. It’s also the biggest multi-artform centre outside of London.

Where to eat and drink in Coventry?

If you’re going to Coventry, you absolutely must try a Coventry Godcake. These triangular fruit-filled pastries have been a regional favourite for over 700 years. They’re traditionally given to children by their godparents on New Year’s Day and at christenings, but nowadays you can snag one at Esquire Coffeehouse, located within the Transport Museum.

Hidden within the Coventry Cathedral, the Rising Café is a chic, eclectic spot that was recently visited by royalty – Prince William and Kate Middleton stopped by for a slice of cake and a cup of tea. We suggest lingering a little longer than the royal couple and soaking up the vintage atmosphere. Ditch the classic afternoon tea and order The Winston instead. Named after Great Britain’s most famous prime minister, Winston Churchill. You’ll feast on roast beef sandwiches, mini Yorkshire puddings filled with gravy, and bite-sized apple crumbles.

If you’re looking for something sophisticated to do on a Saturday night, try The Botanist. It’s seriously sexy, with its sparkling chandeliers and Roaring Twenties feel. Pull up to one of their sumptuous velvet bar stools and order an old fashioned (a whisky-based cocktail) to sip alongside a lively jazz soundtrack.

Not in the mood to get all dressed up? Head over to The Old Crown. The traditional British pub is locally famed for its scrumptious roast dinner served every Sunday. The huge portions are a bonus!

Where to shop in Coventry?

If you love a grungy, artsy aesthetic, you’ll be delighted by FarGo Village. Located near Coventry City Centre, FarGo is an industrial space that’s been repurposed as a thriving collection of indie shops. Browse through eclectic vintage homewares at Auntie Olive’s Attic, get lost in a book in the Big Comfy Bookshop, or just wander around and enjoy the vibrant street art. Trend-chasers will also love the West Orchards shopping centre, which is packed full of some of the UK’s best high street stores such as The Body Shop, Debenhams, and Foot Asylum (a trendy trainer store). It also has a few hidden gems like Chameleon, a men’s boutique stocking trendy designer brands such as Ralph Lauren, Fred Perry, and Stone Island.