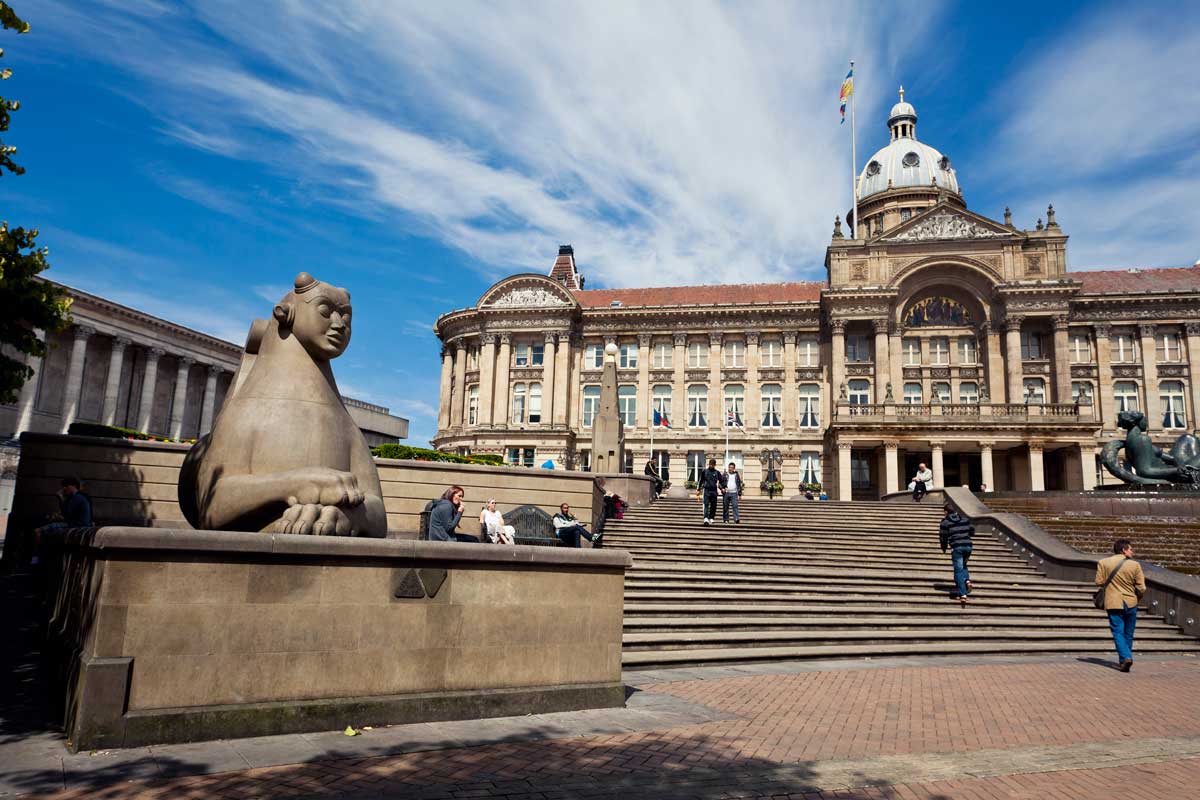 This article was published by the Great British Mag editorial team on 18 Dec 2020.

Birmingham, or “brum” as locals affectionately call it, is the UK’s second largest city which was once the UK’s thriving industrial centre. It’s also the birthplace of some of Britain’s most quintessential food and drink, like Cadbury’s chocolate, Typhoo Tea, Bird’s Custard and pork scratchings.

Locals are nicknamed “brummies” and are immediately identifiable by their sing-song accents. They’re some of the friendliest people in the UK, but the city also produced one of the scariest criminal gangs the UK has ever seen, The Peaky Blinders, who used to rule the streets with their own kind of law.

Today Birmingham is a cosmopolitan city that has many upscale shopping malls, secret bars and some of the most diverse gastronomy in Great Britain. As it gears up to host the 2022 Commonwealth Games, Brum is certainly going for gold.

1) Within Birmingham lies the village of Bournville, built by the Cadbury family to house their chocolate factory workers.

2) You might find this hard to believe but Birmingham has more canals than Venice with over 56 km of waterways spanning the urban area. We can’t claim the pizza is as good though!

3) It also has more parks and green spaces than Paris, with nearly 600 open to the public. Ooh la la!

4) Loosen those waistbands as Birmingham has the most Michelin-starred restaurants (a prestigious restaurant award) outside of London, with four inside the city centre and one just outside.

5) Forget Middle-earth, J.R.R. Tolkien wrote The Lord of the Rings and The Hobbit in Birmingham. Moreover, the Two Towers from the books were inspired by Edgbaston Waterworks.

Firstly, head to the Birmingham Museum and Art Gallery. This world-renowned museum hosts diverse pieces from an iconic HP Brown Sauce factory sign, to famed Renaissance paintings, contemporary art, and Egyptian mummies. It feels like a remarkable mix between Tate Britain and Tate Modern, whilst showcasing 500 years of Birmingham’s past. Spend the morning browsing the art before heading to the Edwardian Tearoom for a scrumptious afternoon tea.

We know most of you will already be well acquainted with your University library, but trust us when we say the Library of Birmingham is something else altogether. The library is the largest regional library in the whole of Europe and has become a huge cultural attraction. The ten-level building boasts an outdoor amphitheatre framed by wild flowers, two outdoor terraces and a panoramic viewing gallery with epic city skyline views. It’s estimated to have cost a whopping £188.8 million to build. So, definitely worth a visit!

Re-live Charlie and the Chocolate Factory fantasies at Cadbury World. You might not meet Willy Wonka there, but they do have honeycomb Dairy Milk, a multitude of free samples and yearlong Cadbury Creme Eggs. You can also have a go at making your own chocolate.

The Custard Factory is worth a visit. A hotspot for Birmingham’s creative class, this booming space was once a Victorian factory. It’s been restored and now hosts a variety of small creative and digital businesses, as well as independent clothing stores. There are small and unique art shops and galleries here too like Apple Pie House, a Mecca for collectible teddy bears and figurines.

Finally, there’s certainly no shortage of bars, clubs and live music venues in Birmingham. Being the home of Black Sabbath, Durran Durran and Mike Skinner of The Streets means their live gigs are pretty legendary too. Head to Symphony Hall to catch everything from Indy-pop to heavy metal.

Birmingham’s rich heritage means there is no shortage of fantastic restaurants. You can literally have the world on your plate, with options from Indian to Italian and Persian to Peruvian, as well as British delicacies of course. The hardest thing is knowing what to pick!

For one of Birmingham’s most famous dishes head to the Balti Triangle neighbourhood. The Balti curry was given its name from the steel pan that it’s cooked in and is said to have originated here in the 1970’s. Today, there are over 100 curry houses in Birmingham and the Balti Triangle is home to many of its finest. Why not try the Balti Prawn Makhani from Al Frash or the punchy Balti garlic chilli chicken from Adil’s. Both places have great vegetarian options too!

For something a bit more decadent, head to Purnell’s restaurant in the City Centre. Birmingham’s Michelin starred chef Glynn Purnell offers a mixture of British home-cooking, French and Far Eastern cuisine. The haddock and eggs topped with crunchy cornflakes and Mom Purnell’s spicy curry oil is worthy of a Michelin Star alone. Simply put, this is posh grub with a creative twist.

After you are done eating, head to 40 St Paul’s gin bar. They’ve won countless awards including “Best Gin Bar in the UK” for their impressive menu offering 140-gins. This intimate bar is the perfect place to sip a few gin and tonics and unwind. Booking is highly recommended here as there are only 24 seats and it’s an incredibly popular place.

For those who prefer pub culture, head to The Inn On the Green in Acocks Green. Having an exceptional variety of real ales, regular live music and incredibly friendly staff make this place a local staple. They also host four beer and cider festivals every year, so there’s lots to look forward to!

Birmingham’s hidden gem, the Jewellery Quarter, is responsible for designing and creating an estimated 40 per cent of British jewellery. There you’ll find over 100 independent jewellers and craft retailers lining the streets. Whether you’re looking to splurge on a sparkly ring or learn more about the area’s dynamic history, you’re sure to enjoy exploring its independent boutiques, galleries and cafes.

The Bullring has boasted strong credentials as Birmingham’s premiere shopping destination since the Middle Ages, when its market first opened. Today its site to over 200 stores and plenty of eateries. You’ll find most high street brands under the shopping mall’s gigantic roof.

Resembling a neon octopus covered in chainmail, Selfridges in the Bullring is paradise for designer addicts and those interested in contemporary architecture. It’s home to luxury brands such as Alexander McQueen, Balenciaga and Off White. They’ve also recently revamped their menswear department making it one of the best in the country.