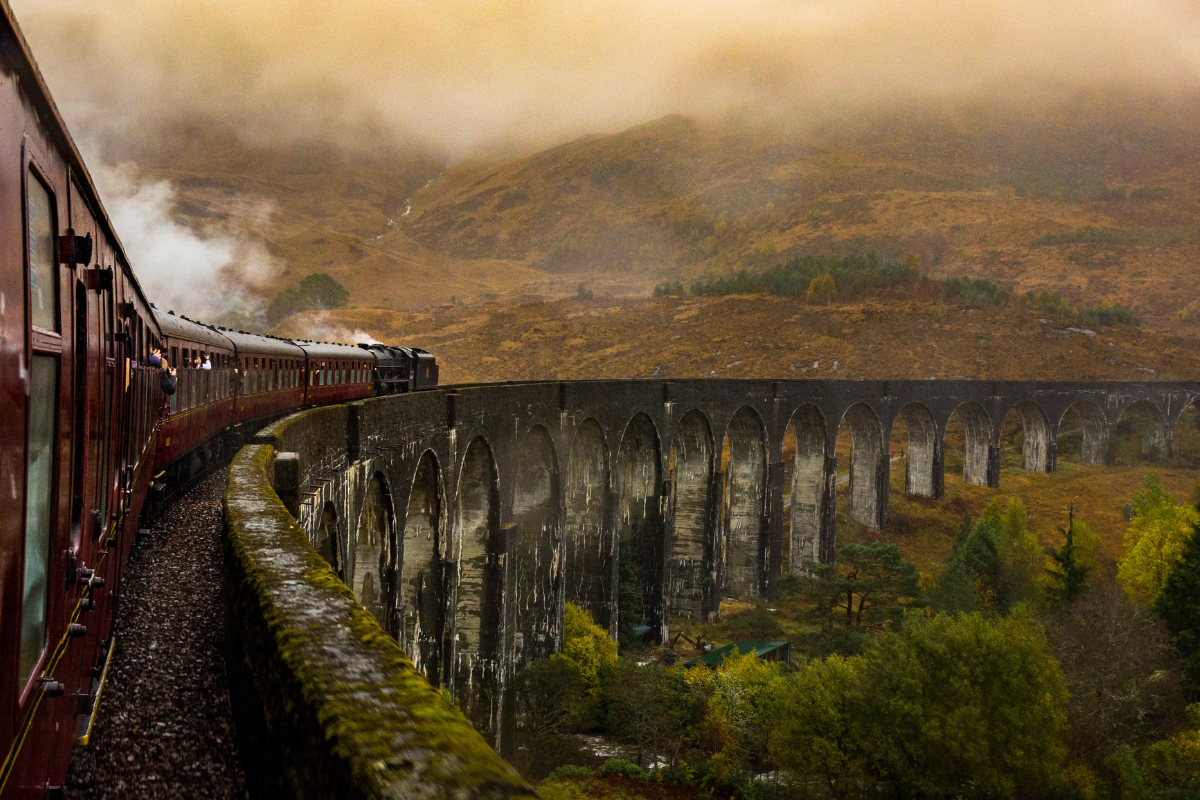 This article was written the Great British Mag editorial team on 26 May 2021.

From secluded pockets of countryside to historical landmarks smack bang in the centre of London, the Harry Potter films feature a huge variety of locations across the whole of the UK. Here are some of the best-known for you to explore and relive the adventures of everyone’s favourite fictional wizard.

This Victorian covered market, with its cobbled stone floors and ornate ceilings, was used as the setting for Diagon Alley in Harry Potter and the Philosopher’s Stone. The entrance to The Leaky Cauldron pub is inside here – although it’s actually an optician’s shop and doesn’t serve butterbeer, unfortunately!

It’s in central London so is super easy to get to – just hop off the tube at Monument Station, or take the train to Fenchurch Street – and it’s open seven days a week.

This cathedral in the South West of England was used for scenes taking place in the corridors of Hogwarts in the first and second films – you’ll no doubt recognise the cloisters, with their stained glass windows and intricate stone carvings (remember the troll stomping down here after destroying the girls’ toilets?). The West Slype door was used as the entrance to the Gryffindor common room, too.

The cathedral is open until 5pm every day for visitors, but check the times of services before you head over.

The 21 arches of the Glenfinnan viaduct have to be one of the most recognised landmarks in all of the Harry Potter films, as part of the journey of the Hogwarts Express. This is where Harry and Ron catch up with the train after missing its departure and deciding to chase after it in Arthur Weasley’s flying car.

Located in the Scottish Highlands, the impressive scenery is a must-see in real life – catch the Jacobite train to travel on the viaduct itself.

Yes, there really is a platform 9¾ at King’s Cross train station. Well, there’s a marked entrance to it, anyway – good luck trying to get through that brick wall!

This is where Harry’s Hogwarts adventures began, as he piled his luggage onto a trolley and ran at the barrier to pass through to the secret platform.

Kings Cross is one of London’s main train stations and is really easy to access – and you don’t need a ticket to check out this cool attraction and have the obligatory photo taken with the luggage trolley.

Similarly to Gloucester Cathedral, Lacock Abbey (which these days is a country manor) lent its cloisters to the Harry Potter films for scenes set in the grand corridors of Hogwarts. It’s here, in the second film, that Harry first hears the Basilisk in the pipes.

Some of the rooms were used too, becoming classrooms for Professor Snape’s potions lessons and defence against the dark arts classes with Professor Quirrell, and the site also features in Fantastic Beasts: Crimes of Grindelwald.

The building is part of a National Trust site and is open each day – buy a ticket and you can explore its rooms and cloisters, as well as the pretty woodland it sits in.

At the start of Harry Potter and the Philosopher’s Stone, Harry and the Durselys visit the zoo – and it’s here, in Reptile House, that Harry hears a python speaking to him for the first time.

This building has stood here since 1926 and it’s open to the public, although you’ll need to buy a ticket for London Zoo (which it’s inside) to get access to it. Sounds like a great excuse for a fun day out, if you ask us.

It’s likely that you know this station better as Hogsmeade in Harry Potter and the Philosopher’s Stone – this is where the Hogwarts Express drops all the young witches and wizards travelling to school.

Set in the pretty, rural village of Goathland in the North East of England, this station isn’t the only site worth exploring while you’re in this neck of the woods. Take the short stroll into the heart of the village and go for a pub lunch perhaps, or don some decent walking boots and take a romp through the North York Moors National Park, which the village sits inside of.

This is the second largest inhabited castle in the UK – home to a Duke and Duchess and their children – and dates back almost 1,000 years. But what we’re really interested in is its appearances in the first two Harry Potter films – it’s where Harry and his classmates have their first flying lesson, and also where he learns the rules of quidditch.

The courtyards appeared in several scenes too, showing the comings and goings of Hogwarts’ students and teachers, while The Lion Arch was used as the way out of the school, leading to the Forbidden Forest.

The castle and its grounds are open each day for visitors and you even get a free broomstick fling class with the ticket price!

Set within the Yorkshire Dales National Park, Malham Cove is an amphitheatre-shaped cliff of limestone rock. This is where Harry and Hermione camp in Harry Potter and the Deathly Hallows when searching for Horcruxes. In fact, scenes for that film took place all around the local area, including Malham Tarn and Gordale Scar – so make sure you explore properly while you’re there.

Malham Cove is open all year and can be reached on foot – there’s a path from the main road that’ll take you there.

Have your tissues at the ready if you decide to visit this rugged Welsh beach on your Harry Potter-inspired travels. This is where Harry, Ron and Hermione bury Dobby the house elf, in what is one of the most gut-wrenching scenes of all of the films. We’re welling up just thinking about it.

It was also here that Bill and Fleur Weasley’s home Shell Cottage stood – although this was built specially and was taken down after filming.

The beach is in Pembrokeshire on the most westerly edge of Wales – it might be quite a schlep away, but there’s lots more gorgeous coastal scenery to enjoy while you’re here.

5 UK universities if you love the outdoors