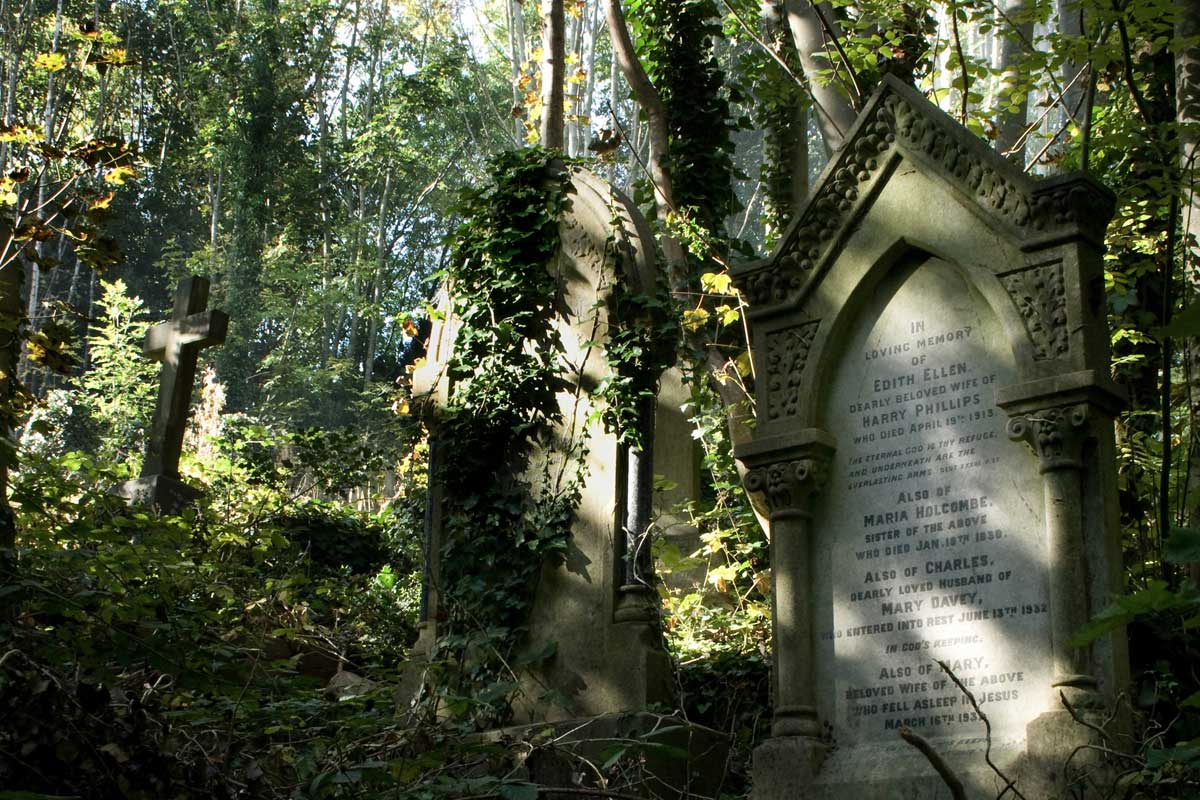 This article about the beautiful graveyards in the UK was updated by the Great British Mag content team on 1 November, 2021.

Graveyards (also known as cemeteries) can be spooky but they can also be incredibly beautiful. They often mesh stunning architecture with natural landscapes, all while honouring a rich history.

The UK has some of the most breathtaking graveyards in the world and many encourage visitors to come and marvel at the important relics and monuments. Here’s our guide to visiting the six best and most beautiful graveyards in the UK:

Highgate Cemetery is probably one of the most famous graveyards in the UK. It’s the resting place of many great minds including philosopher Karl Marx, authors George Eliot and Douglas Adams, and singer George Michael. You’ll find many unique and interesting graves from some of the greatest thinkers, artists and politicians in history.

Highgate isn’t just on this list because it’s the resting place of many famous names. You’ll recognise it from many films and TV shows, such as Fantastic Beasts: The Crimes of Grindelwald or Tales from the Crypt. It has an extravagant maze of ruins inspired by Egyptian architecture, lavish tombs – which include a life-like lion crowning the tomb of a Victorian menagerie owner – and the beautiful nature that has interwoven itself into the architecture.

When: Open daily except 25th and 26th December

St Mary’s sits right next to Whitby Abbey and was the inspiration for Bram Stoker’s Dracula. Whilst Dracula is not buried here, there are lots of mystery and folktales surrounding St Mary’s. Dating back to the 12th century, the abbey has been modified but never rebuilt over the centuries.

There is a mix of fact and fiction in this graveyard. One tombstone close to the abbey is of Humpty Dumpty and another suggests Tom Thumb is buried here – both famous nursery rhyme characters. Asides from the gravestones and gorgeous Catholic church, there are stunning views across the harbour. 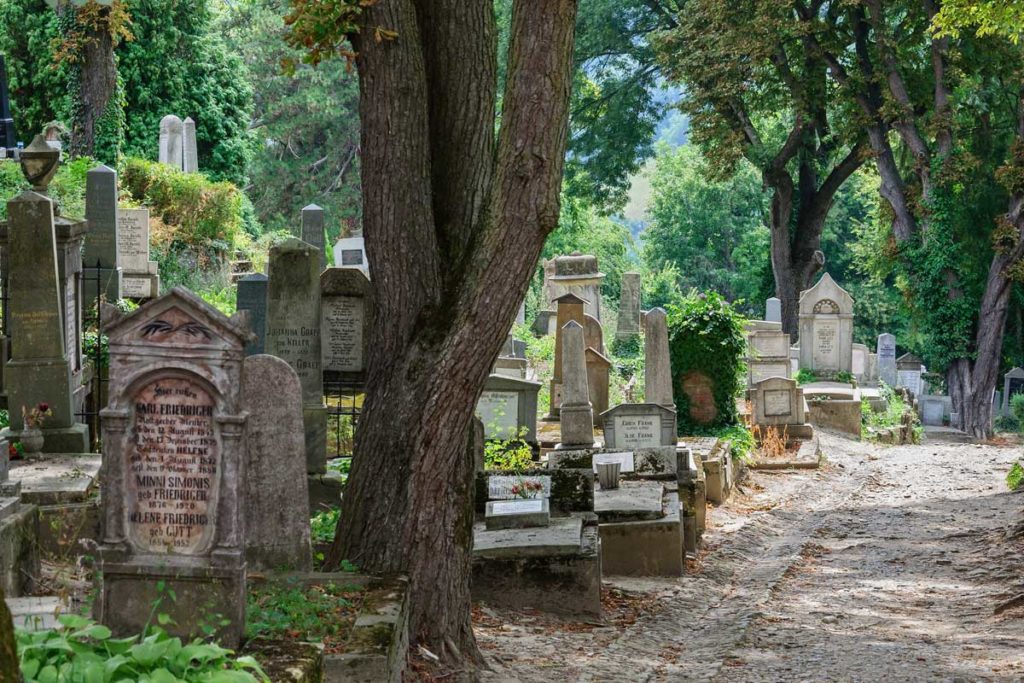 Where: 26A Candlemaker Row, Edinburgh

When: Open 24 hours for free with no tour

Edinburgh’s Greyfriars graveyard is famous for grave robbings, executions, hauntings and lots of other scary stories. This stunning graveyard is filled with extravagant tombs, ancient burials and some of the most beautiful monuments in Scotland.

Visit the statues of Greyfriars Bobby, a terrier who sat by his master’s grave for 14 years (Disney released a film based on Bobby’s life in 1961). You must take a trip here if you are a Harry Potter fan because you will find the graves of Tom Riddle, Professor Minerva McGonagall and Alastor “Mad-Eye” Moody. Greyfriars Kirkyard is thought to be the inspiration behind Godric’s Hollow, the resting place of Harry Potter’s parents.

When: 9am to 5pm, Monday to Friday

When it opened in the mid-19th century, Brookwood was one of the largest cemeteries in the world, spanning around 400 acres. Brookwood is still the largest cemetery in Western Europe. It is the resting place of Saxon kings, military personnel and American painter John Singer Sargent, among others.

It was created to ease the busy London cemeteries of Victorian times and it originally had its own railway line and station. Sadly, the station was destroyed during World War II, but you can still see the iron columns and the entrance. You’ll find eye-catching monuments and graves nestled among the great British countryside.

You will probably recognise Kensal Green from films (or more recently, Emmy Award-winning comedy Fleabag) but it’s also home to lots of wildlife and beautiful Greek-inspired architecture. You’ll see lots of interesting birds and other wildlife, as well as an adjoining canal. It’s the perfect place to escape the busy London life.

This gothic cemetery is the resting place of many members of the royal family as well as historic figures, including railway engineer Isambard Kingdom Brunel, author William Makepeace Thackeray, and playwright Harold Pinter. Although you may not know his name, you should respectfully seek out the grave of circus performer Andrew Ducrow, whose spectacular tomb combines Pagan, Greek and Egyptian decorations. 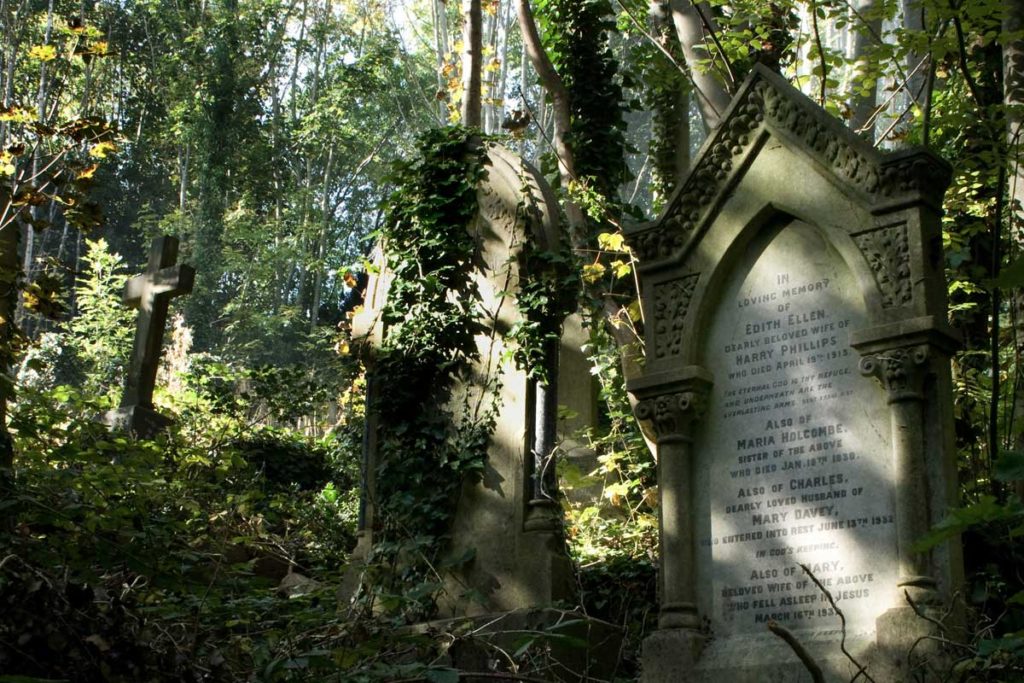 Arnos Vale was inspired by the Père-Lachaise cemetery in Paris and was opened in 1837 by Queen Victoria. Built like a Greek necropolis, this 45-acre cemetery is a wonderful place to walk around and soak up the great outdoors.

Arnos Vale Cemetery is a stunning mixture of Victorian gothic grandeur with overgrown leaves covering gravestones, statues and wildlife. Although you may not recognise many of the names on the graves but it’s worth visiting the burial place of reformer Raja Ram Mohan Roy. Their mausoleum is a grand Indian-inspired piece and stands out among the war graves and Celtic-inspired architecture.