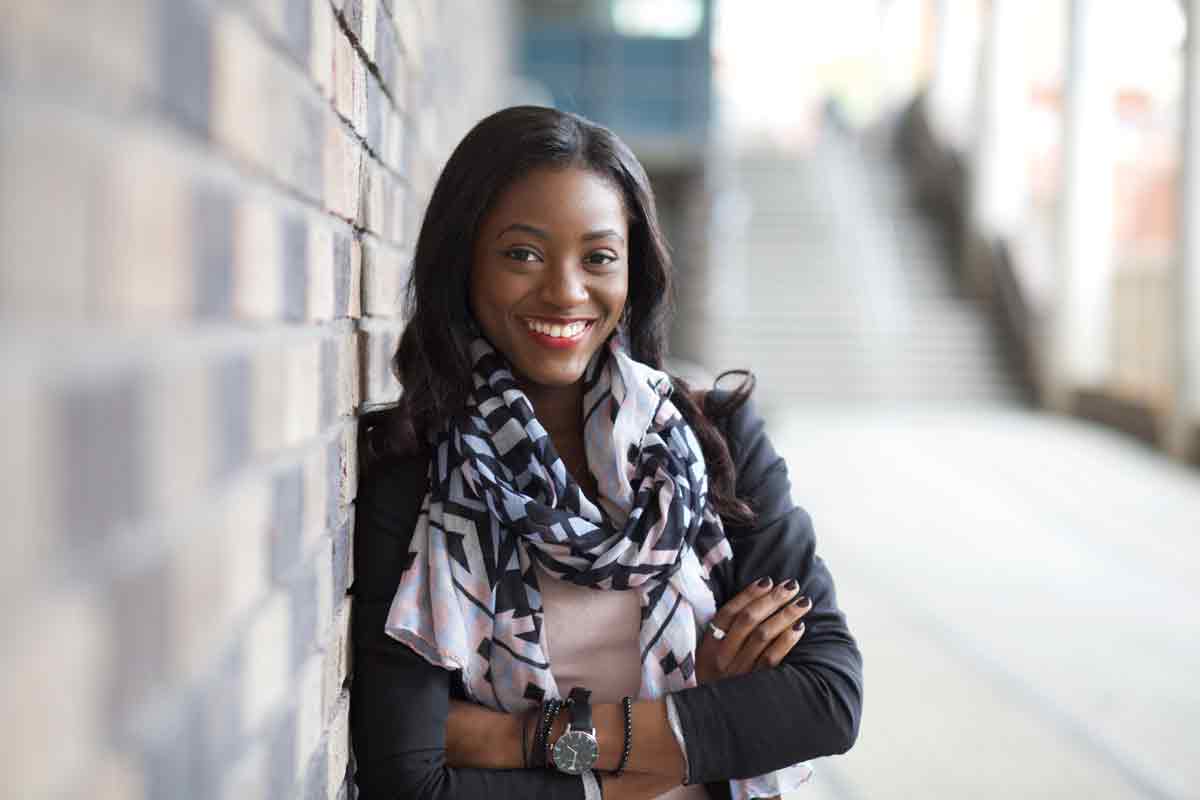 This article was updated by the Great British Mag content team on 21 September 2021.

GB Mag sat down with Olufunmi Odeyemi, who is from Nigeria and has been a student at Nottingham Trent University for the past three years. We found out how Nottingham inspired her to write two powerful poems, both of which won a prize in the Nottingham Young Creative Awards.

Funmi, as she is known to her friends, confesses she’s always wanted to come to the UK. A loyal Manchester United FC fan, she might have originally chosen to study in Manchester to be nearer to the club she has supported since she was eight. Or, as she has family in London, she might have been drawn to the bright lights of the capital.

But after visiting her older sister and brother, who were both students at Nottingham Trent University, she knew this was the city for her.

She says: “I have been coming to the UK since I was a child and when my siblings moved here I came to visit them. It helped me decide that I wanted to study in Nottingham too, even though I could have chosen anywhere in the UK.

“I felt that Nottingham has it all. There is always something happening, so you are never short of things to do. But at the same time I like the sense of community here, something I associate with my home city.”

“Whilst the Nigerian education system is based on the British system, things are very different.”

What her holidays to the UK didn’t prepare her for was the weather. She recalls the shock of arriving in the winter to start her course, having only visited in the summer before. “It was already snowing and whilst I thought I had come equipped with winter clothes, the cold just cut through them.”

Funmi has not only embraced the many differences between her home city of Kaduna and Nottingham (including the climate), but has celebrated them through her creative writing.

The first poem she wrote, “My hidden Nottingham,” captures the sights and sounds of dawn breaking over Nottingham on a winter’s morning. It won the creative writing category of the Nottingham Young Creative Award in 2013.

Her second, which has won the title again, is titled “Made in Nottingham” and is about Funmi’s encounter with a homeless man.

It would be fair to say that Funmi has immersed herself into the city as well as student life, which includes the obligatory pub crawls – a concept that was completely new to her when she first arrived.

“In Nigeria the popular thing for students is to host and attend house parties. Here students move from pub to pub and then onto a club – which is something I actually enjoy now, but initially I used to think, ‘Why can’t we just stay in one place given how cold it is outside most of the time?'”

“I like the sense of community here [Nottingham], something I associate with my home city.”

Funmi enjoys student life in Nottingham including the difference in teaching styles between the UK and Nigeria: “Whilst the Nigerian education system is based on the British system, things are very different. The one thing that struck me immediately and I appreciate is the open dialogue between students and lecturers.

“For instance here I can call my lecturers by their first name, go to them with any problems I am having and email them with questions, which is just brilliant. I think that helps enormously with your studies.”

The interview is now sounding a bit like Funmi is an official ambassador for the university and the City, so I ask her about what she has found difficult and strange about living in the UK. Her response is not something I have heard before, but considering she is studying product design, I am not entirely shocked.

“Well.” And then she pauses. “I find the fact there is a tap for cold water and one for hot a bit strange.”

We both laugh and move on to whether she likes British food.  Her answer is diplomatic: “It’s not that I don’t like it but I cannot think of anything I really love right now, although I don’t mind a good Sunday roast dinner!” Plus, she points out that Nottingham is very multicultural and she can easily pick up snacks and ingredients to make her favourite Nigerian dishes.

Having spoken to Funmi for half an hour or so I have just realised how much she has picked up the Nottingham accent. When I comment on it, she laughs knowingly and says that I am not the first person to tell her she has a “Notts” accent. She has also  picked up some colloquialisms, including “to be fair” – which she starts most of her sentences with.

Our chat is coming to an end. I ask her if she has any advice for other international students, to which she simply replies, “They should just go for it” – which is exactly what she has done!

It was using music to measure time
It was ‘Lightning Bolt’, ‘Trouble Town’, ‘Somebody Told Me’ and ‘Someplace’
It was me getting home
It was anticipating the next time.
It was beautiful
It was Nottingham,
And it was my hidden Nottingham.

My path, narrowing sunlight, I swear I think I can hear a forest nearby.
My path, Broadmarsh to Square, un-skipping puddles on a peaceful navy night.
My mind, oblivious to control, dancing to fresh drizzle because they’d turned off the music.
My mind, captured to a pause, a half-gaze from a sitting figure and then I saw it all.

His skin, clay from the caves, moistened by the rain and abraised by the wind.
His skin, map of the city, bruised and imprinted but patterned to a lace.
His eyes, mirroring the lights, twinkling and reminiscent of a certain travelling fair.
His eyes, a dance so synchronised, waltzing Square to self to elements, pure as they were.