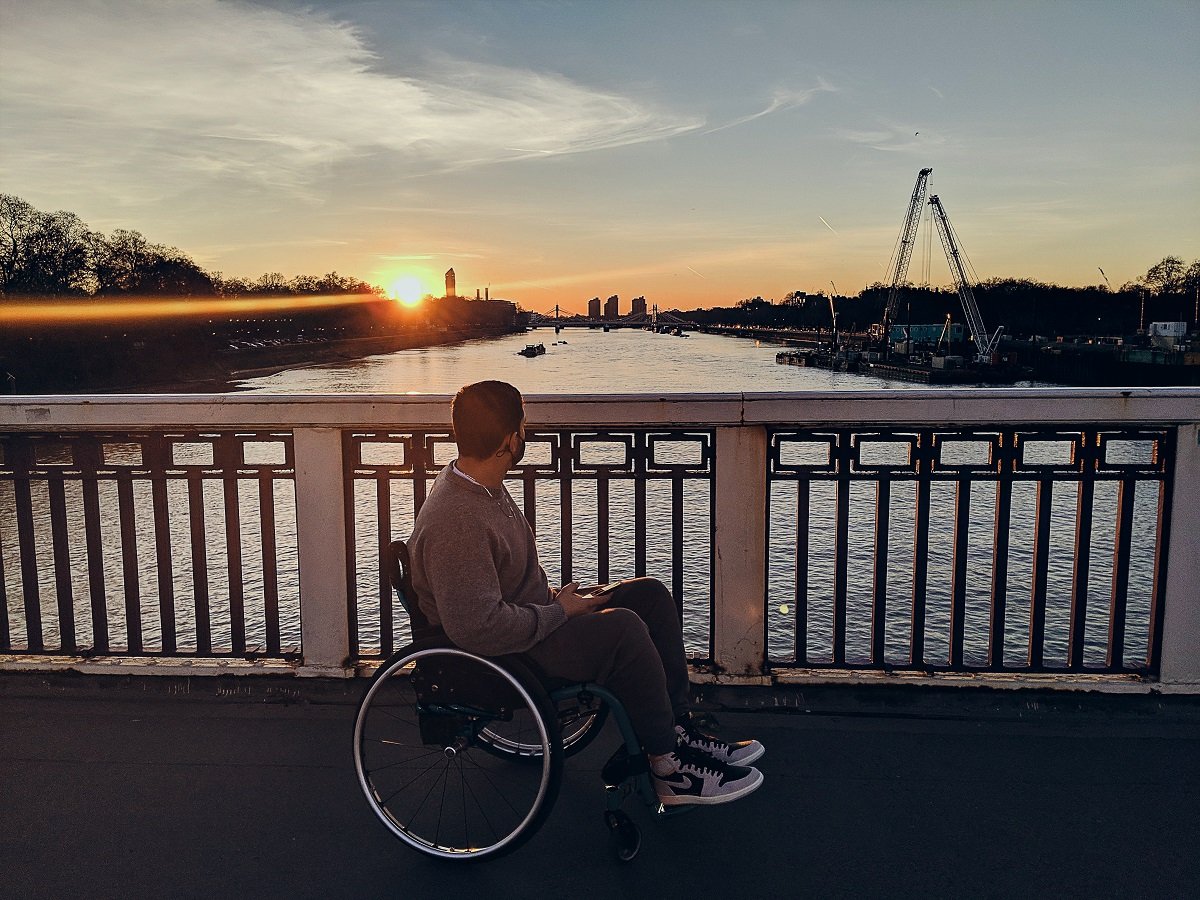 This UK Student Story about navigating student life in a wheelchair was published by Great British Mag content team on May 2, 2019.

One summer morning six years ago in his hometown of Dammam, Saudi Arabia, Shoaeb was driving along when his car slid, rolled over and flipped off a bridge. The next thing he remembers was waking up a few weeks later in hospital with a spinal cord injury and no feeling in his legs.

Shoaeb was heavily sedated for the first few weeks following the accident which affected his memory. When he was more aware of what was going on, the doctors told him that he would not walk again.

Although finding out at 17 years old that he was wheelchair bound was traumatic, Shoaeb says he felt grateful to be alive.

“I was sad about it, like anyone would be. It wasn’t a good feeling. But I looked around me and realised that there were so many people going through much worse than I was, after less serious accidents than mine.

“After that point my whole perspective on life changed. I stopped looking at what I didn’t have and started being grateful for what I did, like a loving family around me offering endless support,” he says.

“My family has been supportive and I’ve made it here. I am really positive about it, and I’m going to continue to be positive and try my best.”

While he spent seven months in hospital recovering, Shoaeb still thought about going to university. That was always his plan before the accident. He would do everything he could to make that happen, even though he hadn’t fully adjusted to life in a wheelchair yet.

Although Shoaeb is originally from Pakistan and has lived in Saudi Arabia most of his life, he only considered attending universities in the UK and Dubai. He has siblings in both places and thought they would be more accessible for a wheelchair user. In the end, he set his sights on England.

He followed up with a few of the universities he’d applied to before his accident, and got accepted into an Engineering Foundation Year Programme at Queen Mary, University of London. Shoaeb found out about this admittance while he was in a 26-day rehabilitation programme after being discharged from the hospital.

Everything moved quite quickly then. A mere six months later, Shoaeb was packing his bags and getting ready to move to a whole new continent. “I was excited,” he recounts, “but I was really worried at the same time.

“I thought about how I had never lived away from home, or even travelled on my own, let alone while being in a wheelchair.”

Despite his very real fears, Shoaeb was comforted by his family’s support and how accommodating the university was, even prior to his arrival.

“I had an interview with the University’s disability service over the phone and they asked me what my requirements were. So by the time I got there, everything was fine.”

Upon his arrival, the University found Shoaeb accessible on-campus accommodation. They made sure all his classes would take place in accessible lecture halls and made special arrangements for his exams.

Despite being far from home, Shoaeb’s brother lives a short distance away in Reading. They visit each other often.

It was easy for Shoaeb to make good friends at university. “It’s felt like home from the start,” he says. But he also mentions that it wasn’t always easy to sort out day-to-day things on his own.

“There have been so many times when my friends have literally carried me up and down the stairs. They’re always taking care of me.”

“It took a while to figure out how to get from one place to another. Little things like doing laundry and getting food become a lot more difficult when you’re in a wheelchair.”

After his Foundation year, Shoaeb was accepted to study an undergraduate degree in Mechanical Engineering at Queen Mary. Now in his final year of the programme, Shoaeb says studying in London has generally been great. However, he mentions there are still many widespread issues that affect quality of life for disabled people. From his perspective, the biggest issue is with public transport.

“Many Underground stations aren’t wheelchair accessible. For example, when I first moved to London, I lived at Mile End. But if you look at the Tube [(The London Underground)] map, you’ll see Mile End Station and the surrounding stations don’t have any lifts, so are unusable by wheelchair users.

“So, the only way for me to use the Tube was to take a bus to Stratford or take a bus to Canning Town, which would add another 30 to 45 minutes to any journey,” Shoaeb recounts.

There have been times where Shoaeb’s had to completely change his plans because of issues with the Tube. Recently, he was on his way to visit friends in Earl’s Court. But once he got to the station, he wasn’t able to exit because both of the lifts in the station were under maintenance—a process which is taking at least five months to complete.

And it’s not just inaccessible Tube stations that Shoaeb faces issues with, but buses too. “The amount of times I’ve been late to my lectures or missed my lectures because the ramp on the bus doesn’t work,” he remarks.

“It already takes so much for me to get out of my house. And then when I do get out, if they don’t have the facilities to move around it really messes with my self-esteem and self-confidence.”

He says things work efficiently enough when he’s taking a fully accessible route. But he must always leave himself an hour to get anywhere.

Shoaeb says another limitation he has faced is with finding accommodation. It was simple when he was living on campus. But he notes that many of the buildings in London do not have lifts. And sometimes when they do have lifts, they might be too crammed to fit his chair, especially in old buildings.

“This affects you when you’re trying to find a flat because it’s often the new or refurbished buildings that have lifts and that tends to make them more expensive,” he says.

He’s been lucky to find suitable flat for himself, but says finding decent and accessible flats tends to be a much more laborious process for disabled people.

And he says these issues extend to bars and clubs too, which limits what Shoaeb can do for fun with his friends. “Bars are rarely accessible, and clubs? No way. Restaurants are a bit better. But it’s really not what you’d expect,” he adds.

Because of this lack of accessibility, Shoaeb says he usually goes to hang out at friends’ places instead. Sometimes he goes out to eat. He says he prefers staying in with others anyway, but that it would be nice to have more options.

“There have been so many times when my friends have literally carried me up and down the stairs. They’re always taking care of me.”

All things considered, his university journey hasn’t been easy. But Shoaeb says it’s been worth it. He’s been working hard to complete his Mechanical Engineering degree and has had so many great experiences with friends along the way.

“Make sure your university is aware of all the exact difficulties you face, so they can provide the best possible support.”

But he says earnestly that, for him, being a student while trying to stay healthy is an ongoing battle. He had to take a year off between his first and second year of university to improve his health before continuing his studies.

“I’m a lot better now after taking that year off, but my health is still a challenge. I have to make sure I dedicate at least an hour and a half to things like my physio exercises every night, and allow myself to rest when I need it.”

“I feel like the accident affected me mentally. So, I have to pay attention to that too, as I think I might have post-traumatic stress disorder.

“My family has been supportive and I’ve made it here. I am really positive about it, and I’m going to continue to be positive and try my best.”

To other wheelchair users considering studying in London, Shoaeb says he doesn’t want his challenges to deter you because anywhere you go will present its own difficulties. But he says there are a couple of things to know that can make your time a bit easier in the UK.

“Make sure your university is aware of all the exact difficulties you face, so they can provide the best possible support,” he says.

“It wasn’t until recently, towards the end of my degree, that I realised my department wasn’t entirely aware of all my challenges. If I had let them know earlier, it would have made things a lot easier for me.

“And before you go anywhere new or unfamiliar, always call and make sure it’s accessible.”