This article about how one student’s passion for tea ended up helping refugees was published by Great British Mag on 18 October, 2019.

Four years ago, on a bitter cold day in December, Pranav Chopra dropped into a community café in Walthamstow, North London to warm up with a cup of tea and bite to eat. While flavourful food was served to him by a Syrian family, Pranav got talking to a few strangers sat next to him. He found out they were refugees who had been in the UK for five years, but had been unable to find employment in that time.

Pranav asked them why they thought that was the case. They opened up about how they were struggling to find local work experience, and therefore didn’t have a local referee to vouch for them either. Some also mentioned they felt discriminated against when they applied for jobs, because of stigma around refugees.

They felt stuck, having seen no results from any of their job applications. And they were forced to rely fully on government benefits and handouts. This story really struck a chord with Pranav and got him thinking about what he could do to help. After doing some research, he discovered that this wasn’t an isolated incident—that so many settled refugees in this country were still struggling to find jobs, even after many years of living here.

At the time, Pranav, who is originally from New Zealand, had finished two undergraduate degrees, an MBA, and was working in finance in the City of London. He’d also started a social enterprise called Slumdog Travels, which he was actively involved in at the time. This organisation runs tours to India which then fund local children’s education.

Fortunately, Slumdog was at a point in its development where Pranav could afford to take a step back. This created time for him to focus on a new side project, inspired by his encounter with the refugees at the café. He decided to call this new venture Chaigaram (which eventually changed to Nemi Teas).

Chaigaram started off purely as a chai tea enterprise, inspired by Pranav’s Indian heritage. Refugees were hired to sell Chai syrup and tea leaves at weekend markets across London, to help them better integrate into society and build their language skills and CVs. They were also placed into roles in manufacturing, packaging and marketing.

Speaking about why he decided to only employ refugees, Pranav says: “Helping them just makes sense to me.”

“Refugees tend to be in great need of job opportunities. Without employment, they are often at risk of becoming homeless.”

Once his social enterprise started to grow, Pranav decided it needed to be rebranded. He wanted the name to be simpler and catchier and thought that Chaigaram, which means hot tea, limited the company to selling chai at markets.

“I thought of Nemi because it means circle of life in Sanskrit. And that ties in nicely with our story. It’s also short, and it’s my grandads name. So, mums super happy.

“Nemi is also more comprehensive. In the future, we might want to add ethical clothing to the brand. So, Nemi Teas could also become Nemi Clothing. And the logo is waves, which looks like an N and symbolises upward moving journeys. That’s exactly what we’re trying to help people create,” he says. 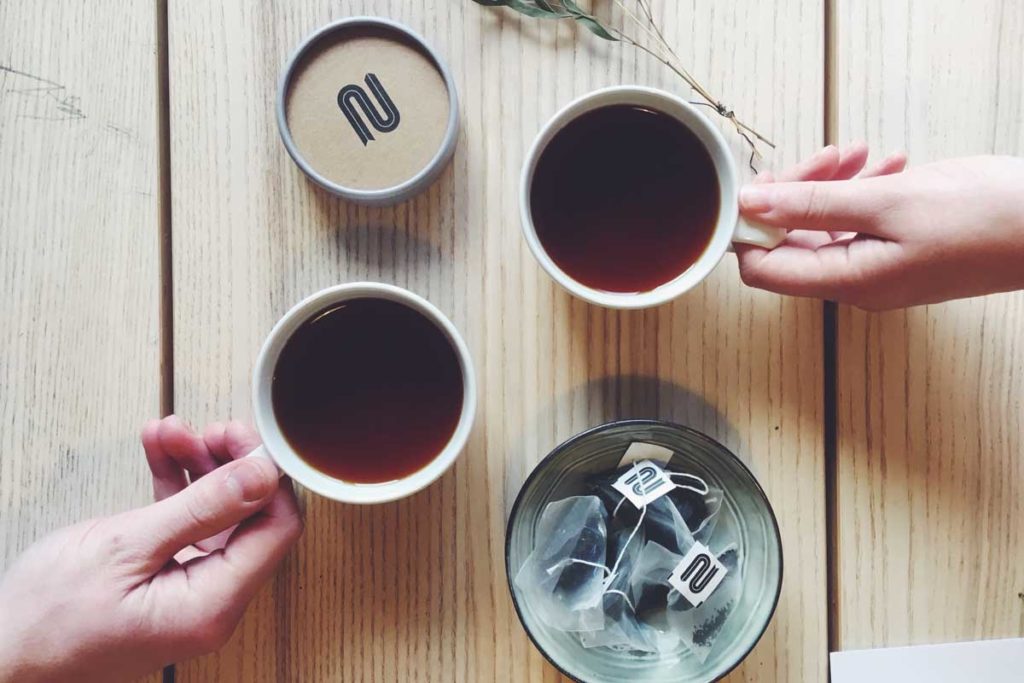 Turning it into a full-time project

Around the time of the rebrand, Pranav left his corporate consulting job and decided to make Nemi Teas a full-time business. He expanded the product line to include black, green, and herbal teas, all sourced from fair-trade tea estates in India, China, Turkey and Morocco.

He also took on a new partner as the Head of Sales and Operations, Alex Langle, who already had a background in social enterprise. Back in his hometown of Lima, Peru, Alex started an organisation providing impoverished children support with their education and health. Having also founded his own tech-start up, Alex knew a lot about sales too.

When Alex came on board, they were able to focus on expanding. Pranav’s focus became signing on corporate clients like investment banks, while Alex was put in charge of getting retail clients including restaurants like The Ned and Ceviche. To date, they have over 70 stockists.

Helping refugees in more ways than one

Both Pranav and Alex assist the refugees however they can, for example by editing their CVs and helping them improve their English. Working at Nemi has become a kind of programme for their employees. They come in, get some work experience and then move on once they can get hired at another job. They are typically offered experience in various parts of the business, so they can learn as many new skills as possible.

The time they stay ranges from one week to several months. Nigerian rapper Femi, their longest standing employee, has worked for them for nine months so far.

“Femi’s had a very difficult past,” Pranav remarks. “He came here when he was 14, but suffers from a medical condition which made it hard for him to find work.

“A few years ago, he accidentally crossed the border from Dublin to Northern Ireland and got caught with an expired refugee visa. He was detained by the home office and forced to seek refuge in the UK, away from his family in Ireland.

“He’s been alone in London ever since, but no one has given him his first job until now, even though is English is perfect.”

Alex says he has a particular soft spot for Femi, because of his constant smile and contagious positivity despite everything he’s been through.

“He’s always talking about his concerts and rapping for us in the warehouse. He really captures the fun spirit of Nemi and shows how we have become a family for many of our employees,” Alex says.

Some of the other employees are similar to Femi in that they’ve never worked before. But many are university graduates and professionals. For example, they used to have a journalist named Anwar working for them who was in his late 40’s and had 25 years of work experience back home in Sudan.

Alongside working at the markets and warehouse, Anwar was put in charge of the company blog. His work was so good that Pranav and Alex shared it with several Arabic newspapers. By doing so, he was able to get work as a journalist in the UK.

“He was incredibly qualified, had perfect English and was an amazing photographer. It’s crazy people like that have such difficulty finding work. So many of these guys are graduates and no one will give them the benefit of the doubt,” Pranav remarks.

Pranav and Alex also helped one young man, Hassan, apply for and get into a Master’s in Chemical Engineering in Nottingham. They connected him with refugee agencies offering scholarships and helped him put his application together.

The challenges of running a business

As fantastic as this all sounds, Pranav and Alex say that hiring refugees isn’t always easy. Firstly, they have to ensure many of their employees don’t work over 16 hours. This is because they rely on benefits to survive and 16 hours is the most they can work before those benefits get taken away.

Pranav says it can also take them a bit of time to adjust to working in the UK and that the refugees face many serious challenges which impact their ability to show up for work sometimes.

“Their reasons are: we became homeless, or this morning we got evicted out of the hostel we’re living in. We come across these situations all the time.”

But they both agree that it’s worth it, despite the challenges. This is because of the tangible impact they are able to make by offering a sense of community and confidence to people who need it as well as a salary and work experience.

“The worlds never going to change if you don’t have people who are passionate about making a change in their communities and giving back,” Alex says.

He adds that it’s the little moments, like having an employee who is a talented rapper keep everyone entertained and upbeat, that make their job fun. “And not only that, but it’s also so rewarding to play a role in improving people’s lives and helping them find happiness.”

Alex recalls how one day recently, they were working with a refugee named Ali, and didn’t achieve what they wanted to because there were issues with  equipment.

“We didn’t see that day as a success, but Ali came to us and said it was the best day he’d had over the past year. That was shocking for us because we thought it was a pretty bad day. It was eye-opening to see how your bad day can be the best day for someone else.”

That was shocking for us because we thought it was a pretty bad day. It was eye-opening to see how your bad day can be the best day for someone else.

Planning for the future

Pranav and Alex want to continue making an impact but on a larger scale. They’re now looking at opening a few permanent take-away café stands around London once they’re able to secure more funding—which they hope will be in the next four to six months. These would be owned and run by refugees as Nemi franchises, which would create a host of more jobs.

“At the moment, we’ve had 19 people go through the programme,” Pranav says. “But our aim is to increase that number by 100 refugees by the end of the year. That’s very ambitious, but let’s see where we go.”