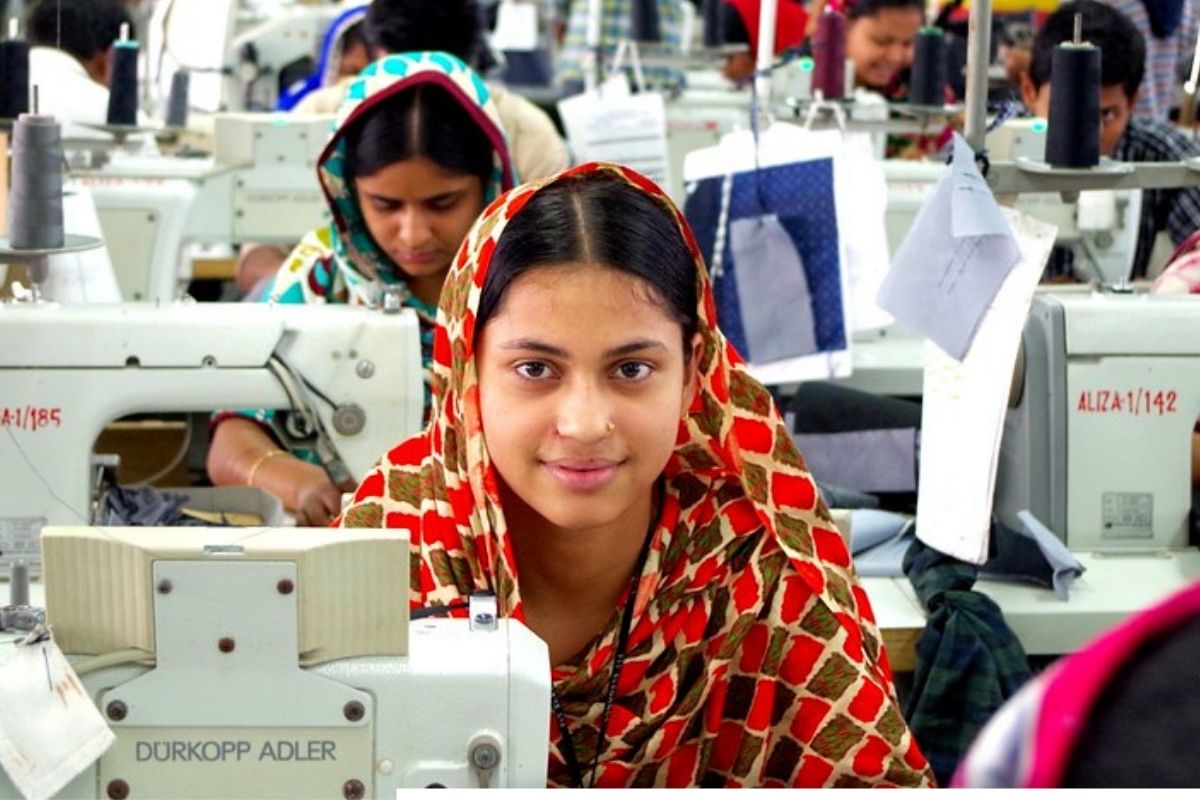 When Mamunur Rahman came to the UK from Bangladesh in 2006 to complete his Master’s degree at the University of Sussex, he had no idea that he would go on to play such a big role in tackling one of the greatest development issues faced in his home country.

He admits that when coming to the UK, he didn’t even fully know about the women’s issues that he’d go on to advocate for so strongly.

Bangladesh is the world’s second biggest manufacturing hub for garments with around four million workers employed in the sector, of which 85 per cent are women, but these women face poor working conditions, low wages and extremely long hours. And moreover, they face serious taboos around their menstrual health and a lack of access to sanitary products.

The market price of pads and tampons are too expensive for many of these women, there traditionally hasn’t been enough education on hygiene and factory managers weren’t, and still often aren’t, sympathetic to the needs of these women during menstruation. These realities lead women to miss two or three days a month of work because of their periods, which prevents them from getting a full month’s salary and also impacts the profitability of the factories.

Mamunur learned about these issues faced by female workers while he was studying at the Institute of Development Studies at the University of Sussex. But this realisation was only the first stop on what has become a long and difficult, but rewarding journey.

factory managers weren’t, and still often aren’t, sympathetic to the needs of these women during menstruation.

He recalls how it really surprised him at first that Bangladesh was such a big part of the curriculum, saying: “Much of what I was learning was really surprising to me.”

“I grew up in the very environment i was now studying but I had been blind to the issues so many many we facing in my country.”

He says that this information really sunk in when he made the connection between this wider issue and the barriers some of his own family members have faced.

“My two sisters couldn’t complete their school education when they were younger and itt wasn’t until later that I realised hygiene was the reason they dropped out.

“They’ve had to live very modest lives as a result. Earlier I was embarrassed by their lack of education and tried to hide it from others. Frustratingly, I blamed them. I still feel really bad about this, which is why I’ve decided to devote my life and career to making affordable sanitary towels available to more  women.” Mamunur remarks.

In Bangladesh, it has been a longstanding tradition for women to use rags and random pieces of cloth as makeshift sanitary products. And because of periods being stigmatised, they often use these materials in very unhygienic ways like reusing them without cleaning or storing them properly, which can lead to infections.

Those working in the factories in most cases aren’t allowed to use the unused scraps from garments to maintain their hygiene, even though they’ll just be thrown away. When Mamunur started doing research on this after returning to Bangladesh, he spoke to many factory managers to ask why this was the case.

“The managers argued that if they allowed them to use scraps then it would block the toilets. And then showed me evidence of this happening.

workers aren’t allowed to use unused scraps from garments, even though they’ll just be thrown away.

“So, I spoke to the women and asked why they weren’t putting the scraps in a bin. The reasons were related to embarrassment of being seen, and fear of getting in trouble,” Mamunur recalls.

After a couple of years working with different female entrepreneurship and development organisations in Bangladesh after his Master’s, Mamunur decided to use his knowledge and contacts to start his own organisation. The aim of this was to create low-cost and easily attainable sanitary pads for women.

After several years of research on the ground and a few trials and errors with developing different products, he went on to officially launch Ella Pad in 2016.

The first products he had initially trialled back in 2010 were disposable napkins. But these weren’t well received as Bangladeshi women tend to feel more familiar with reusable products. This is because they are closer to the common practice of using rags for sanitary pads. So, when Ella Pad was officially launched this became their focus.

They partnered with factories which allowed them to roll out various training programmes among the factory staff like health training, hygiene training and product development training. Once this was done, they start the development of the products within the factories, which provide the space, machines, scraps and workers free of charge, and the final product is distributed amongst the female workers.

“So, the worker is getting their sanitary pads for free while also learning how to make the products by themselves. This is just one of many ways this concept is sustainable,” says Mamunur.

He describes this as the three W model. The process is managed by the women, developed by the women and consumed by the women. Mamunur also mentions that the products that aren’t used by the workers themselves are allowed to be taken away and given to their daughters, sisters, friends and family members outside the factory walls as well. So, the community in a wider sense is also benefitting.

Another way Ella Pad is sustainable is by the type of materials they use. Although there are hundreds of scrap options available within the big factories, Mamunur says they are very particular with their choices.

“We only use scraps with really high absorbency and one’s which don’t release harmful chemicals into the body and environment. Most of time we use 100 per cent cotton. You’d be really surprised at the amount of organic cotton that gets thrown away,” he explains.

If sold at retail price in Europe, North America or even in Bangladesh, this is would be an expensive product. But for these women it becomes virtually free.

However, convincing many factory managers to allow this to happen was in itself an impressive feat, when previously many of them wouldn’t even let their workers take bathroom breaks, which Mamunur has witnessed all too often.

“It was regularly the case that workers were not allowed to have a toilet break, because the factory owner didn’t want their employees wasting time. Sometimes they’d actually put a sign on the door saying ‘occupied,’ but when you would check it wouldn’t actually be in use.

Things are changing slowly and the information that finally got some factories on board was Ella Pad’s evidence on the financial benefits of providing sanitary products and safe hygiene facilities for female workers. Mamunur was able to prove to the managers that they’d see economic growth at their factories, and he explained that this was a sustainable use of what would otherwise be trash.

I want to help create an environment where my daughter and her friends can go to school and work without dropping out because of not having access to this very basic necessity.

Mamunur has helped thousands of women but feels this is still a drop in the ocean and explains “We need more retailers, that use factories in Bangladesh, to support our initiative to get factory workers making and distributing the Ella Pads.

“We can solve not just a local problem but a global problem. I’ve seen that this issue is universal, it’s not just unique to Bangladesh. But our situation is just particularly horrible.

“But now I’m very confident that if we can get more of the private sector onboard, we can solve this issue. I want to help create an environment where my daughter and her friends can go to school and work without dropping out because of not having access to this very basic necessity.

“The fact that my sisters never got to finish their education still haunts me.”