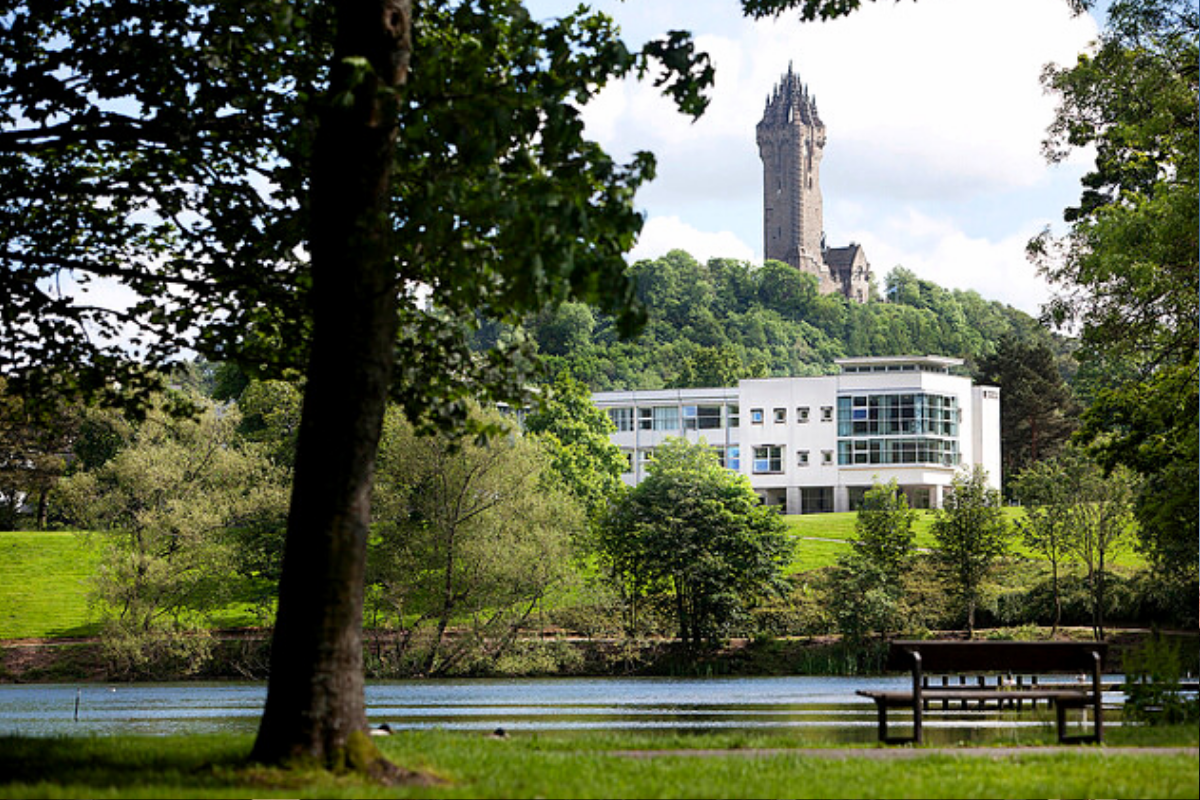 This article was published by the Great British Mag content team on 16 June 2021.

Are you an international student who’s considering the University of Stirling for your studies? Before you decide, read our guide to get the lowdown on what it’s like to live in this Scottish city and study at its famous university.

What are the best things about studying in Stirling?

If you love the great outdoors then this handsome city is right up your street. Located in central Scotland, it sits right at the foot of the Highlands – a largely rural area that’s peppered with mountains – and is near to the National Park of Loch Lomond and The Trossachs. So rest assured there is plenty of gorgeous Scottish scenery to explore, right on the city’s doorstep.

The larger cities of Edinburgh and Glasgow are also really easy to reach from Stirling and take less than an hour to get to. Stirling itself has plenty of appeal though – the quaint Old Town has historic charm by the bucketload.

The University of Stirling has a good reputation among its students, with high satisfaction scores for lecture expertise and more than 95% of leavers going on to secure a job or place on a further education course within six months of finishing. The campus is one of the most beautiful in the UK too, encompassing a loch (the Scottish word for ‘lake’) and looking out onto the Highlands.

If you’re looking to study sport then this could be the university for you: it was named Sports University of the Year 2020 by The Times and Sunday Times Good University Guide and is rated second in Scotland and fifth in the UK for its sports facilities.

If you’re keen to live in a sprawling metropolis then Stirling might not be for you. The city (which the uni is actually a couple of miles outside of) is relatively small, with a population of around 100,000. There are just under 10,000 full-time students at the university.

As it’s so far north, the weather in Stirling is much cooler than in other parts of the UK – although it’s considered relatively warm when compared to many other Scottish regions. You’ll need a trusty umbrella here too as rain is very common, especially throughout the winter months.

Also, if you’re not used to the Scottish accent and dialect, it’s worth bearing in mind that it might take you a little while to be able to clearly understand the locals.

Almost a quarter (24%) of the university’s students are from overseas, and there are roughly 120 different nationalities on campus, so you’re guaranteed to meet other international students and residents from other countries during your time here.

At the heart of the campus you’ll find the INTO centre – INTO helps students from all over the world come and study at Stirling, and its on-site venue is a great place to get support and meet other international students. Its café Umami serves global food, including Thai curries, bao buns, gyozas and pho soups.

International food and groceries are on offer in the city itself too, with shops ranging from Polish delicatessens to Asian supermarkets. Look in Stirling city centre for Malik Halal Foodstore, The Honest Shop and Sun-Wah Chinese supermarket and Asian grocery store – they’re all right near the train station. You’ll notice a variety of restaurants serving food from different regions as well.

Although it’s crammed with history, Stirling is actually a relatively new city, having been given status in 2002 (before which it was a town) as part of the queen’s Golden Jubilee celebrations.

It’s known as the ‘gateway to the Highlands’, thanks to its location at the foot of the prominent mountain ranges, and is also famous for the ancient castle that sits up high on top of volcanic rock. This castle was home to Scottish royalty – including Mary Queen of Scots – and has seen famous battles take place around it, such as Stirling Bridge and Bannockburn.

The world’s oldest football, dating back to 1540, was found behind some oak panelling in Stirling Castle. Football fans might be interested to know more about Stirling’s connection with football and why Mary Queen of Scots was mad for the sport.

Where does the University of Stirling rank?

Times High Education placed the uni in the 301-350 bracket for 2021 in its global rankings, and at number 35 roughly in the UK.

Stirling is also one of Scotland’s best universities for sport, thanks to its specialist courses and state-of-the-art facilities. The uni counts professional golfer Gordon Sherry and Olympic swimmer Todd Cooper among its alumni.

The institution is also well-regarded for its high research output. It offers a variety of postgrad research options across the fields of society and community, global sustainability, and healthy living.

How much does it cost to study at the University of Stirling?

Most undergraduate courses cost between £15,000 and £18,000 per academic year and take four years to complete (although some do have three-year options). One-year postgrad masters courses are up around the £20,000 mark.

Stirling is considered a pretty affordable city when it comes to the cost of living (Lloyds Bank’s Affordable Cities Review 2019 put it in the number one spot in the UK) and the uni estimates it’s about 40% cheaper than living in London. Student accommodation starts at around £84 a week – which is below the national average – and, given that the city is small, travel isn’t a significant expense, either.

Yes – there are a number of opportunities for both undergraduate and postgraduate courses, which promise to cover a proportion of your tuition fees. Some are open to students from specific countries, while others focus on particular fields of study, such as sport, which the uni specialises in.

The University of Stirling’s campus is pretty impressive. Located just outside of the city near a quiet but pretty town called Bridge of Allan, it spans 330 acres and incorporates the picturesque Airthrey Loch and the 18th-century Airthrey Castle. That’s right – there’s an actual castle on campus.

There are lots of rural hiking trails right behind the campus’ accommodation too, so you can be stomping among gorgeous scenery in no time.

A real hub of student life, the campus has a host of facilities including an on-site cinema and theatre, various cafés and restaurants, a popular bar, an Olympic-sized swimming pool, a modern and well-equipped gym and a library with half a million books lining its shelves. That should keep you busy.

So impressive is the campus in fact, that it was ranked first in the UK (and fifth in the world) for its campus environment by the UK International Student Barometer (ISB) Benchmark and Global ISB Benchmark in 2018.

Despite being packed with so many facilities, the campus is pretty easy to navigate and nothing will take you more than a 10-minute walk to get to.

There are 24 university-run accommodation options for students, including a handful of locations that work for families and couples, too. Most of them are on campus so will have everything you need close by – the majority of halls are about a 10-minute walk away from the main buildings – and the ones that are a little further out are connected to campus by bus routes.

All the accommodation is self-catered, but there is a café in the heart of the Accommodation Village on campus for when you don’t fancy cooking.

Does Stirling have good nightlife?

As a student-friendly city, Stirling offers plenty of entertainment after dark. Fubar is really popular for students looking to let their hair down and party until the early hours, as is Aussie-themed bar The Kilted Kangaroo.

If you prefer to keep things more low-key, there are plenty of cosy pubs to hole up in, and the campus bar – which hosts pub quizzes and karaoke nights – is a good option too, which lots of students make the most of.

The uni also runs a busy schedule of evening events, often hosting guest speakers in the theatre and ceilidhs (social events with Scottish dancing), as well as celebrations for dates such as Burns Night.

Will I be able to find a part-time job in Stirling?

Although slightly smaller than other Scottish cities, there are still plenty of cafés, pubs, restaurants and shops that would be ideal for part-time work, and students don’t find it difficult to pick up jobs.

Most people look to the city for work, but with so many facilities on the university campus, you might well be able to find a role there. That would be especially convenient if you’re living in the on-site accommodation – talk about the dream commute!

The city is well-served by reliable busses – the Uni Link is the fastest and most direct way to get between campus and the city centre, taking about 12 minutes or so. There’s also a train station in Stirling with regular trains to the neighbouring cities of Edinburgh and Glasgow.

For an even cheaper (and perhaps sometimes faster) way to get around, bike-sharing scheme Next Bike has 200 bikes stationed across the city in 28 locations. The best bit? Students get to use them for free. Just download the app and sign up to get peddling.

Stirling doesn’t have its own airport, but it’s less than 40 miles from both Edinburgh and Glasgow airports so is easily accessible from there.

If you’re an undergrad, the first thing you’ll likely notice when looking at courses in Scotland is that they tend to be a year longer than those in England and Wales (four as opposed to three).

This is because Scottish universities encourage students to take a wide range of modules in their first year, so that you can get as much experience as possible and make an informed decision about what niche you’d like to specialise in. This does mean you might pay more overall in tuition fees, but it also means that you’re far less likely to get to uni and realise the course isn’t what you thought it would be.

How to open a bank account in the UK

What is the National Student Survey?

University discrimination: What it is and how to deal with it