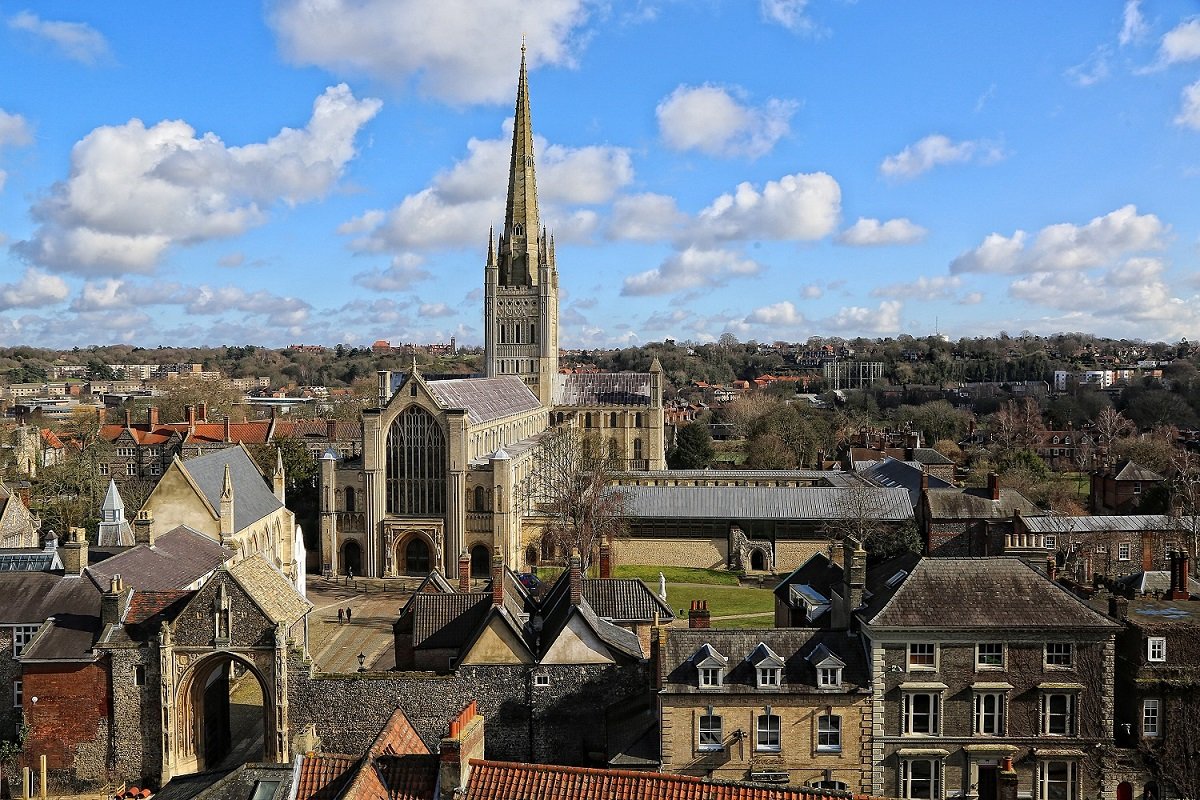 Norwich is known as the city of pubs, and for good reason. Legend has it that it once boasted a whopping 365 pubs – one for each day of the year. The accuracy of this claim is a bit dubious, but Norwich still ranks in the UK’s top five for pubs per square mile.

The city also lays claims to two cathedrals and is said to have more standing medieval churches – 32 in total – than any city north of the Alps.

Beyond the bibles and booze, though, Norwich is something pretty special. It’s the only English city that lies inside a national park – the Norfolk Broads – and is within easy distance of Norfolk’s award-winning beaches. It is also rich with centuries of history and was named England’s first UNESCO City of Literature.

What to do in Norwich

On a sunny day, snag a little peace and quiet for only £2 by heading to the Plantation Gardens. The manicured Victorian garden is beautifully managed by a team of dedicated volunteers and it’s the perfect spot for a picnic.

In the evening, pass beneath the giant medieval gates of St Ethelbert’s and Erpingham and make a beeline for Tombland. Once the site of an Anglo-Saxon marketplace, Tombland is now home to a range of bars and restaurants and comes alive at night. Outside the city lie the Broads, a huge system of manmade canals, rivers, and lakes. Walk or bike along the water on a sunny day or hire a boat and go exploring. Check out little nooks and quirks of the waterways, find the perfect fishing spot, or stargaze on a clear night. When you need a break from the water, moor near one of the many pretty villages and market towns and go find a nice pub.

History-lovers will immediately be drawn to Norwich Castle, which was built by William the Conqueror. You can trace the area’s ferocious military history through exhibits about Romans, Boudica, Anglo-Saxons, Vikings, Normans and the Royal Norfolk Regiment. You can also check out the gentler side of Norfolk’s history with the castle’s collections of fine and decorative arts, which date back to the 1400s.

There are two cathedrals in Norwich and both should be on your agenda. Norwich Cathedral is over 900 years old and is the second-tallest in the country (with the first being in Salisbury). It’s the most complete Norman Cathedral in England and is an architectural treasure trove. Don’t forget to look upwards  because the cathedral’s spire is home to a pair of breeding peregrine falcons, who have had chicks every year since 2012. The other cathedral, The Cathedral of St John the Baptist, is a grand Victorian building with magnificent white columns. Climb its tower for 360 panoramic city views.

After spending so much time indoors, clear your head by taking a peaceful walk along the River Wensum. Be sure to stop by Fye Bridge – it’s supposedly the oldest river crossing in Norwich.

What and where to eat in Norwich

Take full advantage of Norwich’s proximity to the sea; Cromer crab, samphire (aka sea asparagus), Brancaster mussels, and Stiffkey cockles are all on the menu. Head to Brummell’s Seafood Restaurant, order the warm seafood platter, and spend an evening dunking a variety of fish and shellfish into delicious garlic butter. For a cool place to chill out, head to Frank’s Bar and get stuck in with a tasty selection of tapas-style small bites. The same places offers a Sunday cinema club.

If you’re in need of a scrumptious snack, try The Waffle House. This indie joint has been serving up sweet and savoury treats since 1978 and relies heavily on local produce. Delve into curry-topped waffles, spiced fruit stacks and classic pairings like pecan nut and butterscotch sauce.

Where to shop in Norwich

The Norwich Lanes are a treasure-hunter’s paradise. This series of alleyways and open communal spaces are chock-a-block with indie shops, cafés, restaurants, bars, and theatres. Visit Sevenwolves, Dogfish, and Catfish for designer brands like Vivienne Westwood, Fred Perry, Obey and Adidas. Curl up with a good book at The Book Hive, flick through records at Sue Ryder Vintage, or pick out some new decorations at Lisa’s Angel and The Plant Den. Norwich Market, which has been in operation for over 900 years and boasts iconic colourful roofs, is a great place to browse through clothes and sample tasty fresh foods. You can even take a one-hour guided tour of the market and sample some food for £7.50.

High-street aficionados will enjoy Gentleman’s Walk and St Steven Street; both have shops like Primark, WH Smith and New Look. You can also find high-street brands at the Chapelfield and Castle Mall shopping centres, which are just five minutes’ walk from each other.