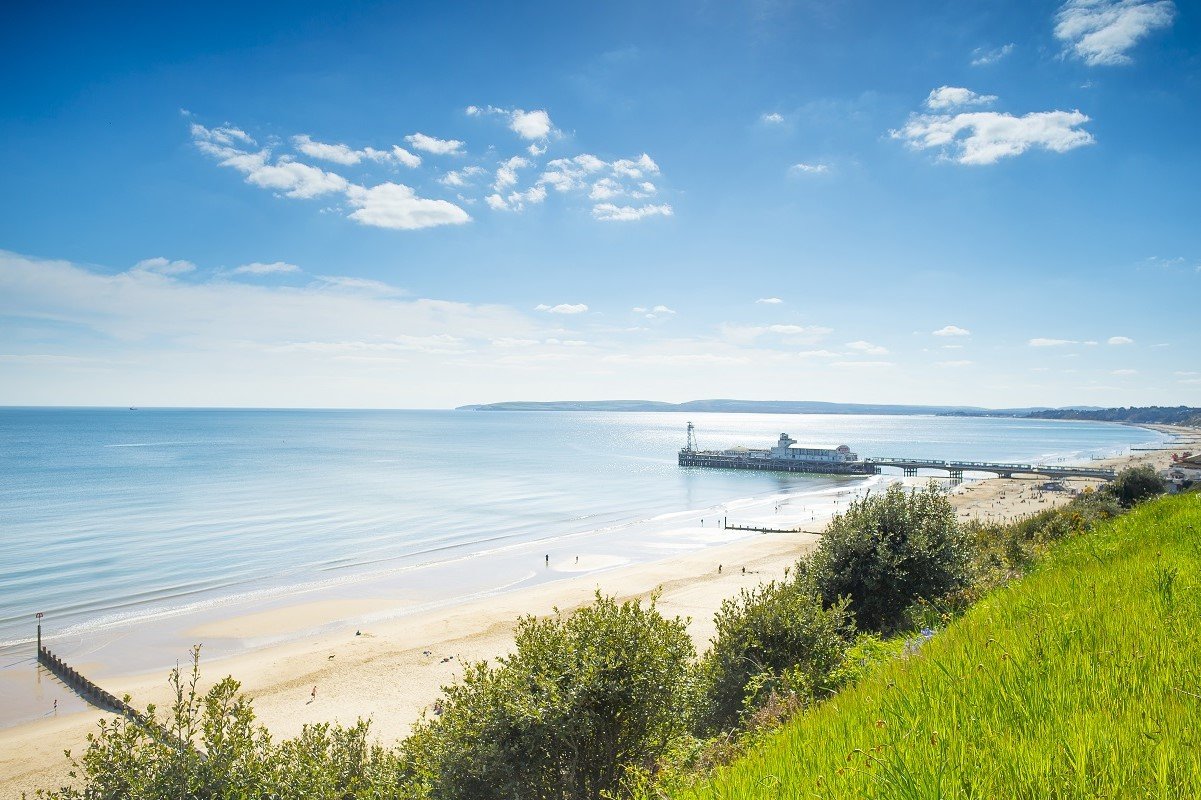 Beach town Bournemouth is as perfect as a postcard. With its long stretches of golden sand and sparkling sea, it’s no surprise that it regularly features at the top of our staycation holiday hit list. Sample mouth-watering fish and chips, explore secluded islands and visit pre-historic rock formations.

Spend your summer days basking in the endless sunshine or visit in the cooler months to slap on a wetsuit and catch the season’s best waves.

1) Bournemouth has been called home by some pretty impressive literary figures including JRR Tolkien (who wrote The Lord of the Rings) and Enid Blyton (a prolific British children’s author).

3) Bournemouth Pier has the world’s first and only pier-to-shore zipline.

4) Don’t worry about fighting for space with your deckchair – Bournemouth has over seven miles of glorious sandy beach stretching from Christchurch to Sandbanks.

5) Bournemouth is home to Europe’s first artificial reef, meaning that the waves are better (and bigger) for surfing.

Hit the beach! Bournemouth’s most-loved feature is undoubtedly its pristine beaches. Whether you’re after a wintertime stroll filled with fresh air or fancy diving head-first into the sea come summertime, there’s no better feeling than sand between your toes – especially at one of the best beaches in Europe. The 2019 TripAdvisor Traveller’s Choice Awards named Bournemouth the #1 beach in the UK and the #6 beach in Europe.

Frequently compared to the French Riviera, Sandbanks Beach is one of the most beautiful stretches of sand in Dorset. The water is idyllically still, with few to no waves, so try your hand at SUP (stand-up paddle boarding), kayaking, or canoeing all the way to neighbouring Alum Chime.

Once you’ve finished splashing around, dry off in one of the quintessential British beach huts. The brightly-coloured wooden cabins are perched right on the sea front and are available to rent. Pop open your deck chair and watch the world sail on by.

Boscombe Pier was voted the coolest pier in the UK and with its fish-friendly mini-golf, we can see why. Test your skills on the green and, on the last hole, watch your ball (which is made entirely of fish food) drop into the sea as a treat for the fish.

Catch a ferry across to Brownsea Island, home to an abundance of rich wildlife (including the very rare red squirrel) and an ideal picnic spot. Explore the island via its walking trails or come June, catch a play at the outdoor theatre.

Perched right on the pier with a panoramic view of the twinkling sea is Aruba. Grab a table on the Caribbean-inspired restaurant’s outdoor terrace for dinner and watch a kaleidoscopic set of pink, orange, and purple dance across the sky as the sun sets.

Rick Stein in Sandbanks is perfect for a posh plate of fish and chips with a view. If you prefer your British staple to go, then head to Chez Fred, located moments away from Bournemouth’s Pier. Your catch of the day will be wrapped in newspaper and your chips will be doused in lashings of vinegar.

Just a short stroll along the beachfront is the neighbouring village of Westbourne, which is home to a whole host of quirky stores, cute cafes and independent restaurants. Pour yourself a glass of plonk (wine) and taste your way through one of Renouf’s signature cheese boards.

Continue the vacation vibes with a trip to The Lost Garden, Bournemouth’s premium bar and nightclub. This tropical treasure trove filled with lush foliage is known for its fancy cocktails. Have a “Balinese fruit punch” – which includes Pimm’s, rum, and plenty of fresh fruit – and lose yourself in the summer vibes.

The sky’s the limit at Level8ight Sky Bar at the Hilton Bournemouth. Situated opposite The Lost Garden, it’s the highest bar in Bournemouth. Share a glass of bubbly or two with your friends while you look out over the entire seafront.

Bournemouth’s Royal Arcade and Town Centre are filled with popular high street shops like Zara, River Island, and Primark. Castlepoint is a retail park, easily accessible by car or bus housing a huge Topshop and H&M.

For one-off vintage finds, shopaholics should head to Clobber. Foodies will enjoy the eclectic selection of vegan treats at Sunrise Organics.